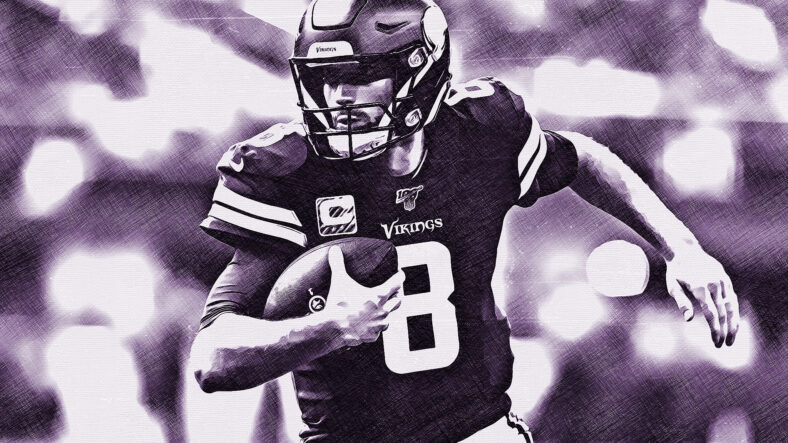 Minnesota Vikings quarterback Kirk Cousins will commence his fifth tour of duty for the team in 2022, the team’s longest-running QB1 since Daunte Culpepper in the early 2000s.

With Cousins, the Vikings are 33-29-1 (.531), an underwhelming win-loss split as Cousins is generally one of the Top 10 highest-paid players in the NFL.

But that record was achieved with former head coach Mike Zimmer, who fancied defense-first operations for eight seasons in Minnesota. Zimmer and his boss, Rick Spielman, were fired after a disappointing 8-9 season in 2021, and Kevin O’Connell was hired to lead life-after-Zimmer.

Perhaps with an offensive-minded skipper in O’Connell, the Vikings offense will attain its apex. That’s the working theory anyway, as Cousins is outfitted with weaponry like Justin Jefferson, Dalvin Cook, Adam Thielen, Irv Smith Jr., K.J. Osborn — and O’Connell’s brain.

And a Cousins rise-to-superstardom isn’t wholly out of the question, according to NFL analyst Kyle Brandt from NFL Network. Brandt and his co-hosts selected “dark horse” MVP candidates for 2022, and per Brandt, he envisions a scenario where Cousins emerges as a contender for prestigious trophy.

Unsurprisingly, all of the theories listed by NFL Network are quarterbacks. A non-quarterback has not won the award since a Viking in 2012 — Adrian Peterson for his otherworldly campaign a decade ago.

Sportsbooks are not high on Cousins — or any of the four men above — to win the MVP award, though. Per VegasInsider.com, Cousins is the 18th-likeliest player to win the 2022 NFL MVP award with a +5000 moneyline, the same odds afforded to Trey Lance (who has never started a regular season game) and the aforementioned Jones from New England.

Cousins’ numbers in the past are certainly compatible with Brandt’s hypothesis. Last season, he authored a 33-touchdown to 7-interception ratio, the same statline Brett Favre produced during the Vikings almost-storybook 2009 season. Without a playoff appearance or win, however, Cousins’ 2021 stats were swept under the rug as meaningless.

Moreover, Cousins will need at-least-average pass protection from his offensive line this season if he is to effectuate Brandt’s theory. Inside Cousins’ Vikings career, the best offensive-line bunch allotted to him is 27th in the league via pass-blocking. And that is code for sixth-worst.

If the pass protection isn’t horrid, Cousins will indeed have a puncher’s chance at the MVP award.

A Vikings quarterback has won MVP hardware one time — Fran Tarkenton 47 years ago (1975).