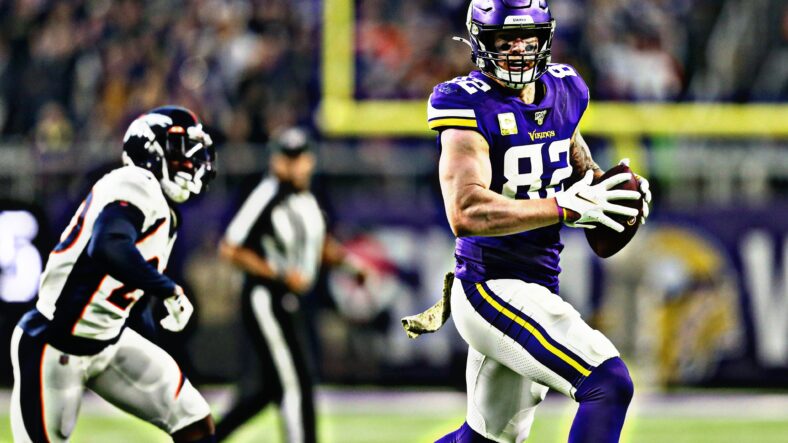 Former Minnesota Vikings tight end Kyle Rudolph worked out with the Denver Broncos recently, a familiar team for the 32-year-old.

Denver is familiar to Rudolph because the Broncos general manager is George Paton, the Vikings second-in-command behind Rick Spielman for several years in Minnesota.

Rudolph played for the New York Giants in 2021, a target for Daniel Jones in the quarterback’s third season. With the Giants, Rudolph tallied 26 receptions on 39 targets for 257 yards and a touchdown en route to a 63.5 grade from Pro Football Focus.

Before New York, Rudolph played for ten seasons with the Vikings, ranking second all-time for the franchise in receiving yards by a tight end. He was a notable redzone target for Kirk Cousins, Case Keenum, Sam Bradford, and others, earning the nickname Redzone Reindeer.

Regrettably for Rudolph, he became a cap casualty for the second consecutive year this offseason, casting him again into the free agency net. If signed by the Broncos, he’d play for his first AFC team. For tight ends on Denver’s roster, Paton and new head coach Nathaniel Hackett currently employ Albert Okwuegbunam, Eric Tomlinson, and Shaun Beyer.

Ex-Bronco Noah Fant, a promising TE talent, was traded to the Seattle Seahawks, along with quarterback Drew Lock, in the Russell Wilson trade from March.

Signing with the Broncos would also reunite Rudolph with ex-Vikings running back Mike Boone.

Rudolph would likely fill a TE2 or TE3 job with the Broncos.