Klint Kubiak Could Land on His Feet Sooner than You Think 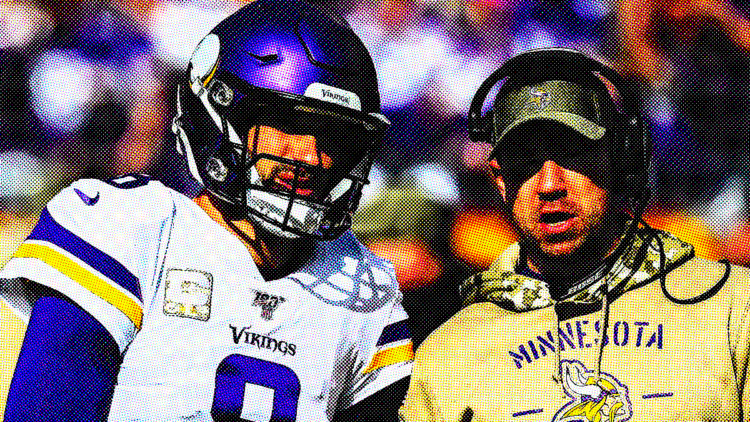 The Minnesota Vikings are in a state of flux after firing key leadership figures, Rick Spielman and Mike Zimmer, on Monday.

Any day, Vikings ownership should be conducting interviews with potential new general managers – of whom will then hire a head coach – if the group is not already.

Typically when a head coach is terminated, his staff is in limbo as some coaches might stay behind and join the new staff – or simply depart with the fired coach. Most of the time, the new skipper brings “his guys” to the table for a fresh look.

The limbo state is the case for Zimmer’s former staff, too. Andre Patterson, the team’s co-defensive coordinator, could remain with the Vikings, although that is speculatory.

One man is already getting job interviews – and that is Klint Kubiak. The 2021 Vikings offensive coordinator is scheduled to chat with the Carolina Panthers, who fired Joe Brady a couple of months ago.

On most bingo cards, Kubiak was not the first man theorized as a hot commodity. In 2019 and 2020, Minnesota’s offense ticked, pushing the ball downfield and mixing in Dalvin Cook’s rushing acumen aptly. This season, though, the Vikings offense was anemic a lot of the time. On the whole, the Vikings offense was not trashy, but it did encounter many more hiccups in 2021 than 2019 or 2020.

Kubiak’s offense ranked 17th in NFL per EPA/play – you know, mediocre. For the metric, the Vikings were worse than the Denver Broncos and Seattle Seahawks but better than the Cleveland Browns and Baltimore Ravens. It was a weird year.

Thankfully, Kubiak’s quarterback, Kirk Cousins, flung 33 touchdowns to just seven interceptions, keeping the enterprise afloat. Cousins was more effective in September-November than December as the Vikings offense sputtered down the stretch. Coupled with a suspect defense that collapsed at the end of halves, the Vikings offense was not good enough to save the season.

And that’s why it’s a wee bit odd for Kubiak to receive attention amid the coaching carousel. However, Kubiak is young and has oodles of time to improve. Players do that, so do coaches.

Minnesota is expected to find a new coach of its own, replacing Zimmer in the coming weeks. Per Vegas betting odds, Eric Bieniemy from the Kansas City Chiefs is the frontrunner to land the job.