Kirk Cousins Had a Better Career than Andrew Luck 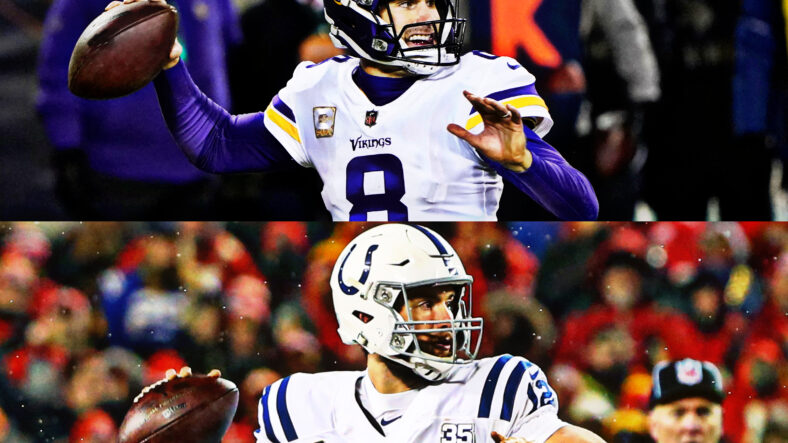 The 2012 NFL draft included some great quarterback prospects like Andrew Luck and Robert Griffin III and some underdog stories like Russell Wilson and Kirk Cousins. One decade later, who had the best career of the passers in the 2012 draft class so far?

“RG3” was the second overall pick in the 2012 draft after a stellar 2011 college season in which he won the Heisman trophy. In the NFL, Griffin had a hot start. He won the rookie of the year award following his dynamic first year. At the end of the season, he had knee surgery and was never the same after. He retired after the 2020 season. Between 2015 and 2020, Griffin started only seven games.

Case Keenum broke a lot of records when he was in college. He attended the University of Houston, where he became the FBS all-time leader in passing touchdowns in 2011. He is the only quarterback in Division I FBS football history to throw for more than 5,000 yards in three different seasons.

Keenum went undrafted and signed with the Houston Texans. In his first five years, he spent three in Houston and two with the Rams, starting 24 games. In free agency in 2017, Keenum signed as a backup for Sam Bradford in Minnesota, where he had one of the most remarkable seasons of any undrafted quarterback in NFL history. Bradford injured his knee and only started two games in the season. Keenum became the starter and led the team to the NFC Championship game.

Case Keenum signed a contract with the Denver Broncos and started all 16 games in 2018. After the season, the Broncos traded him to Washington, where he started another eight games — followed by two seasons as the backup for Cleveland Browns quarterback Baker Mayfield.

Foles started his college career as a teammate of Kirk Cousins, who was a redshirt freshman in 2007, as a backup quarterback of the Michigan State Spartans. After his only season as a Spartan, he transferred to Arizona, where he was the starter for three seasons.

The Eagles drafted him in the third round. He struggled in his rookie campaign for Andy Reid. Chip Kelly was hired as head coach and unlocked the full potential of the young quarterback. He started ten games and finished the season with 27 touchdowns and just two interceptions. In 2014, he could not live up to his earlier success and was traded for Sam Bradford to the Rams. After just one season, he was traded to the Chiefs, just to return to the Eagles in free agency in the next off-season, where he replaced injured starting quarterback Carson Wentz and moved on to win a Super Bowl and was recognized with the Super Bowl MVP. Following another postseason run in the 2018 season, he continued his journeyman career with stints in Jacksonville and Chicago.

Tannehill had an interesting college career for Texas A&M. He redshirted his freshman year in 2007. In 2008 and 2009, Tannehill finished third and second in the QB competitions and played wide receiver. In 2010, he started the season as a receiver but took over as the starting quarterback midseason, replacing Jerrod Johnson. Finally, in his redshirt senior campaign, Tannehill was the starting quarterback for the Aggies.

The Dolphins selected the former wideout with the 8th overall pick as their new passer. He was the first first-round quarterback the Dolphins drafted since 1983, when Dan Marino started his hall of fame career. After starting every game in his first four years, he missed games in his next three, including missing the full 2017-season due to a torn ACL. Overall, his career in Miami can be described as “up and down.”

Before the 2019 season started, the Dolphins traded their quarterback to the Tennessee Titans. He opened the season as a backup for Marcus Mariota and replaced him in week six. Since then, he has been wonderful for the Titans, leading them to the AFC Championship game in 2019 and two additional playoff appearances in 2020 and 2021.

The Stanford quarterback, Andrew Luck, was seen as a generational talent and therefore was the obvious first overall pick. ESPN draft expert Mel Kiper Jr. had high praise for the prospect and ranked him second on the list of the best quarterbacks he has ever scouted, only behind John Elway:

“Luck has it all: size, incredible smarts, accuracy, and a great work ethic. I compare him a lot to Peyton Manning, but Luck is more athletic. Because of this, the expectations for Luck will be through the roof. He has the overall makeup to deal with that type of pressure and go on to enjoy a career that lives up to all the hype.”

Luck earned Pro Bowl honors in each of his first three years in the league, including in 2014, when Luck led the league in passing touchdowns. However, over the next three years, the Stanford graduate just played in 22 of the possible 48 regular-season games before he had a phenomenal 2018 season. He was named Comeback Player of the year.

After his career is over now, it´s fair to say that he didn´t live up to the hype. He was a good quarterback, borderline-elite in some seasons. But that does not sound like one of the greatest quarterbacks in NFL history. Luck retired at age 29, before the start of the 2019 NFL season. The four-time Pro Bowler was a fierce competitor, but an injury to his throwing shoulder and the long rehabilitation were the reasons for his retirement. His career will forever be remembered as a “What if…?”.

Unlike Andrew Luck, Kirk Cousins did not have high expectations entering the NFL draft. He was viewed as a mid-round pick and was likely to become a career backup. Fortunately for the Minnesota Vikings, things went a different route.

It was April 28th, 2012. the second pick of Washington´s draft took place in the fourth round after trading up to take Robert Griffin III in the first round. To the surprise of everyone, they again chose a quarterback. It was the Michigan State passer, Kirk Cousins.

Thomas Boswell of the Washington Post had some strong words about the pick:

“It was utterly moronic. Since 1991 more than two-third of all quarterbacks taken in the fourth round have been complete busts; and less than ten percent of those 4th-round quarterbacks have had significant careers – Kyle Orton, David Garrard and Aaron Brooks out of 31 quarterbacks taken in thee 4th round. Only one even made the Pro Bowl – Garrard, once. In other words, there´s about a 70 percent chance Cousins will never even throw five TD passes in the NFL.”

Ten years later, Kirk Cousins has not just thrown five touchdowns. He has thrown 223 touchdowns in the NFL and is statistically among the top-10 quarterback in the league every year. Cousins has thrown for 25 or more touchdowns in seven consecutive seasons. In his first three seasons, he was the backup for RG3 in Washington before taking over as the full-time starter in 2015. After three seasons as the starter, Cousins signed a contract in free agency with the Minnesota Vikings. He can undoubtedly be called “franchise quarterback” by now, after playing for four years for the NFC North team. Cousins is under contract for two more seasons.

The Seattle Seahawks did not only select the eight-time All-Pro Bobby Wagner with the 47th overall pick, but they also picked Russell Wilson in the third round. The 75th overall pick fell in the draft solely because of his height. In February 2012, the director of the IMG Madden Football Academy, Chris Weinke, said:

In his career, Wilson has proven that height does not matter for a quarterback. He is a nine-time Pro-Bowler and a Super Bowl champion. He undoubtedly moved on to have the best career among quarterbacks of the 2012 NFL draft class.

Janik Eckardt is a football fan who has a fable for numbers and stats. He chose the Vikings as his favorite team, despite Christian Ponder being the quarterback at the time. He is a walking soccer encyclopedia. Classic rock is his music genre of choice. He likes to argue about the Vikings on Twitter. Contact him on Twitter: @JanikEckardt