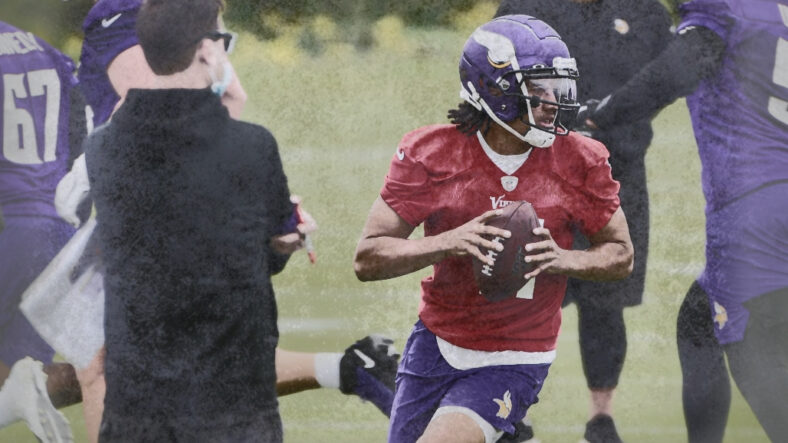 It didn’t need a ceremony, but Minnesota Vikings quarterback Kellen Mond is no longer in the coaching staff’s doghouse.

Mond struggled to gain attention in the Vikings 2021 offense, surpassed in the preseason for QB2 duty by veteran Sean Mannion. The former Vikings coaching staff valued Mannion to the utmost — for some reason — so Mond as QB3 wasn’t wildly surprising.

But when Mannion’s hand cramped in a late-season game at Lambeau Field, Mond entered the game for one drive. It didn’t go well, and Minnesota punted after three lackluster plays. After the game, Mike Zimmer was asked about Mond:

This was the go of it for Mond in 2021, failing to win the trust of Zimmer and the offensive coaching staff. The “not particularly” quip from Zimmer was the apex of Mond’s doghouse placement.

Eight days after the Zimmer admonishment, the Vikings ownership terminated Zimmer, along with general manager Rick Spielman, for another mediocre season. Kwesi Adofo-Mensah took over as general manager, and he hired Super Bowl champion Kevin O’Connell as head coach.

Soon after O’Connell’s arrival to Minnesota, it was apparent his personality was more accommodating, friendly, and open-minded than his predecssor’s. And, as of April 19th, Mond left the Zimmer doghouse, evidenced by O’Connell’s words to reporters:

“[Mond’s] got some real athleticism, and I think he’s a naturally accurate passer. Now, what will that look like in our offense? That’s really up to Kellen and the rest of our guys to kind of make it go. I’m just excited to get on the grass with him next week. He’s been great in the meeting rooms early on. You feel some leadership from him. You feel some early ownership from what we’re kind of putting on those guys. Now, it’s just a matter of can you take it from the classroom to the practice field.”

Undoubtedly, Kirk Cousins is the team’s QB1 for 2022, as Adofo-Mensah committed to the passer through the end of 2023. But Mond will have the opportunity to seize the QB2 job this summer, even though the Vikings — again — re-signed Mannion in March. And if Mond plays his cards right, there’s still a path for the Texas A&M alumnus to QB1 if life-after-Cousins comes sooner than later.

No such opportunity would’ve been available if Zimmer was still in charge, unless the ex-skipper underwent a full change of heart on Mond. At the time, Zimmer was criticized for “tearing down” the confidence of his rookie quarterback with the not particularly remark.

Yet, Vikings fans — and Mond personally — don’t have to worry about that anymore. O’Connell offered an upbeat assessment that didn’t relegate Mond to the bowels of the depth chart.