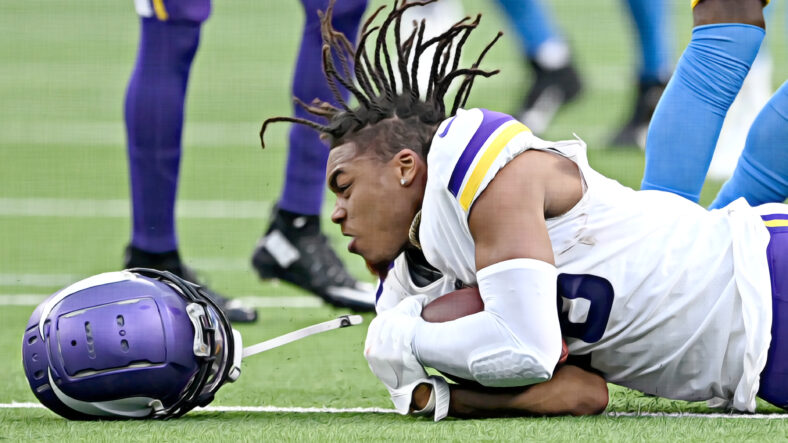 Minnesota Vikings wide receiver Justin Jefferson embarks on Year Three in the NFL in 2022, and according to Pro Football Focus, he’s the seventh-best player at his position.

In 2021, Jefferson ranked fourth in PFF grade — the website that employs Treash — fourth in receiving yards, and sixth in receiving touchdowns. Still, despite entering his third campaign with an obvious upward trajectory, Jefferson was nominated as the seventh-best in the business.

Treash supported the Jefferson-at-seventh placement, “The big concern with Jefferson coming out of LSU in 2020 was his ability to effectively defeat press-man coverage on the outside. After two years in the league, it’s safe to say that’s no longer a concern, and even that it’s now the 6-foot-1, 202-pound wide receiver’s greatest strength — only Davante Adams has produced a higher grade against press-man coverage since 2020.”

Jefferson will showcase his skillset outside the confines of a run-first offense for the first time in 2022. The Vikings fired Mike Zimmer in January, who was unabashedly known for running the football and stymying opponents with defense. Replacing Zimmer is Kevin O’Connell from the Los Angles Rams, an offense-first thinker who helped quarterback Matthew Stafford guide Los Angeles to a Super Bowl victory in February.

O’Connell’s Rams threw the football 60.3% of the time in 2021, ranking ninth-most in the metric. Minnesota passed the pigskin on 58.5% of all offensive snaps, 16th in the business — or smack dab in the middle.

Jefferson has three seasons remaining on his rookie contract. In 2025, he’ll command a massive contract, likely in the neighborhood of $35 million per season.

Talks with the Vikings about Jefferson’s next contract could begin as early as next offseason.