Vikings WR Stoked for Next Payday with New NFL Trend 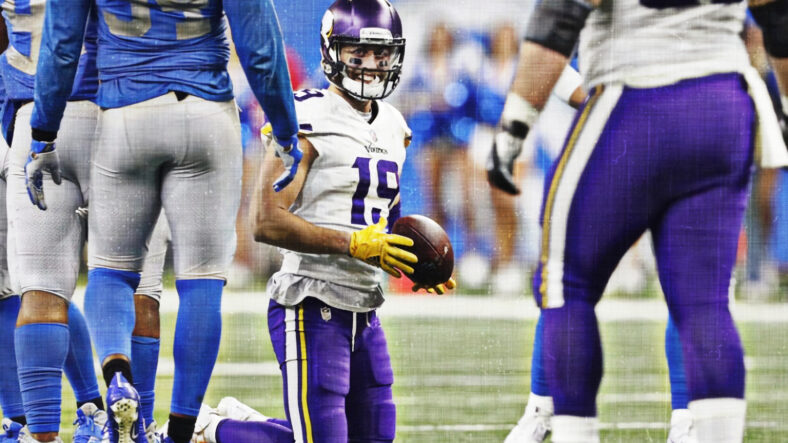 A new contract for Minnesota Vikings wide receiver Justin Jefferson will be all the craze next offseason, but longtime pass-catcher Adam Thielen knows his payday is coming, too.

Jefferson, 22, has three years left on his rookie contract, slated for an elephantine $30-$35 million per-season deal when the 2025 season begins. Thielen, 31, recently restructured his deal and earns $16 million per year, an agreement scheduled to end after the 2024 season.

Thielen will be 32 this summer, a tender age for wide receivers as some venture late in their 30s performing at a high level. And others fizzle out, usually due to injury. Evidenced by his latest comments to NFL Network, Thielen envisions his production in the former category.

Thielen said about the exploding market for WR contracts:

“Yeah, it makes me want to play the game a few more years. It’s going pretty well for wide receivers, [I’m} excited for [the guys that are getting paid] and also, it doesn’t hurt my future opportunities at all.”

In March, new Jacksonville Jaguars wideout Christian Kirk netted $18 million per season with a free-agent contract, an astronomical figure for a pass-catcher who’s never tallied more than 1,000 yards in a single season. After that, like wildfire, the WR market boomed, fetching $30 million annually for a player like Tyreek Hill, who was traded to the Miami Dolphins from the Kansas City Chiefs in March.

Thielen ranks 18th in the NFL at the moment in average annual salary, bedfellows with men like Cooper Kupp, Allen Robinson, and Robert Woods. So, if he remains healthy and continues to score touchdowns like a madman — that’s his new modus operandi — he’ll be rewarded like Christian Kirk soon.

Since the start of 2019, Thielen ranks 41st in the NFL in receiving yards — but fourth in receiving touchdowns. It’s one of the odder stats in professional football.

Also, he hasn’t played a full season or tallied over 1,000 receiving yards in a season since 2018. In that regard, the 2022 campaign will serve as a referendum on his age-32 ability.

Thielen is the second-longest tenured Viking behind safety Harrison Smith.