Infamous Vikings Lineman May Actually Start for the Bears 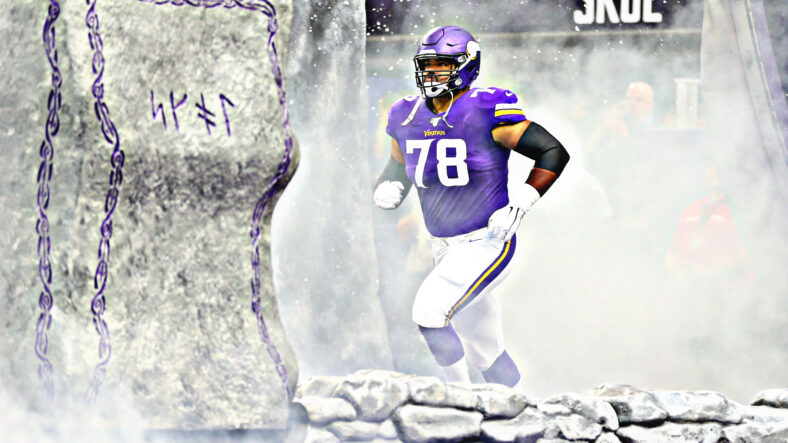 Wipe that smile off your face; they’re apparently not kidding.

When the Chicago Bears signed veteran offensive lineman Dakota Dozier in March, the move was head-scratching for a couple of reasons.

Indeed, upon landing Dozier to its roster, Chicago tweeted it ascertained a “bulldozier,” a curious claim for a player who notched a 44.6 grade from Pro Football Focus during his last full season of employment.

As the 2022 offseason trudges forward, it seems Dozier may actually start for the Bears. The regular season doesn’t begin for 3.5 months, but according to credible roster projections, Dozier might be “the guy” for Chicago at right guard.

A starting job for Dozier would be puzzling as his pass protection is highly suspect. In 2020, he graded a pass-blocking 36.7 score from PFF, which scraped the bottom of the NFL. Plus, the Bears employ a young quarterback in Justin Fields, so the working theory suggests the franchise would want to fortify the trenches aptly for a developing passer. It is unclear if Dozier would rapidly change his skillset to accommodate that.

Last week, NFL.com forecasted every team’s starting lineups and — wouldn’t you know it — Dozier was listed as the Bears starting RG.

And it doesn’t stop there. ESPN, too, foresees a starting role for Dozier. On ESPN’s website, where it illustrates depth charts for every team, Dozier is right there in the Bears section with an R and a G next to his name.

Of course, the Vikings offensive trenches are not a group of glory, but at least the new leadership regime opted not to retain a player possessing consistently putrid OL marks. The Bears could learn about Dozier’s acumen this summer and choose not to start him accordingly. Or perhaps — a longshot — Dozier will be suddenly revitalized in Chicago, performing well with a new coaching staff. It’s possible.

Realistically, though, the Dozier projection is further evidence that Chicago has constructed a strange offensive depth chart to support Fields. A glance up and down either depth chart above vivifies underwhelming energy next to a quarterback who flat-out wasn’t very good in his rookie year. And the Dozier etching next to RG only heightens the sentiment.

If Dozier does make the 53-man roster, he’ll see his former purple team in Week 5 as the Bears travel to U.S. Bank Stadium for an unusually early road game at the Vikings. The Bears haven’t played in September or October at Minnesota in a season since 2006.