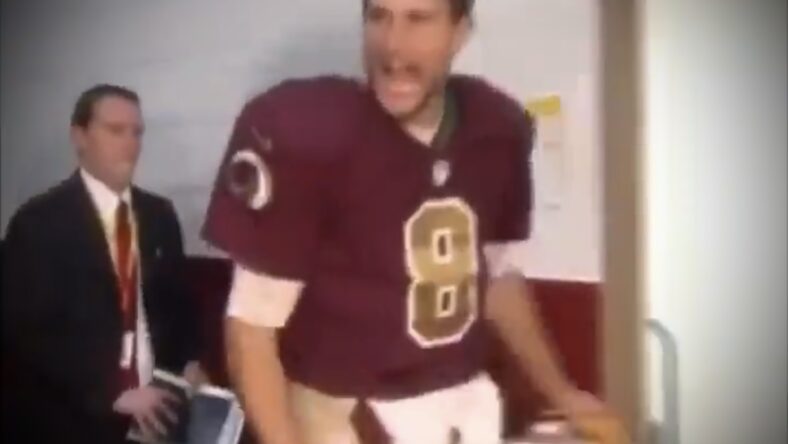 Kirk Cousins has earned himself the reputation of a dad-like QB in the NFL for his quiet, oftentimes goofy and lighthearted demeanor on and off the field. Every once in a while, though, we get outbursts of competitive Kirk that inspire viral videos. The first of those moments happened seven years ago, today.

On October 25th, 2015, Kirk Cousins was in the middle of his first year as a full-time starter in Washington, and things had not been smooth sailing through the opening six weeks of the season. The team was 2-4, and they needed to get back on track with a win before the Week 8 bye if there was any hope for a playoff run.

Their next game was against the Tampa Bay Buccaneers, who had gotten off to an equally rough 2-3 start under rookie QB Jameis Winston.

However, Winston looked much like division rival Drew Brees for much of the first half against Washington’s defense, and Tampa jumped out to a 24-0 lead in the second quarter. Winston passed for a pair of touchdowns while Cousins lost a fumble on a strip sack which led to a 43-yard TD return by linebacker Howard Jones.

Washington managed to stop the bleeding before halftime as Cousins ran for an 8-yard touchdown, trimming the lead to 17 points heading into the break.

In the second half, momentum completely flipped. Winston was sacked on third down of the opening drive, forcing Tampa to punt for just the second time of the day. Cousins promptly led another touchdown drive, trimming the lead to 10 just four minutes into the third quarter.

Then, head coach Jay Gruden made the gutsy call of going for an onside kick. Sure enough, it worked, and suddenly Washington had the ball with an opportunity to trim the lead to one possession. Of course, Captain Kirk did just that, completing a three-yard touchdown pass to TE Jordan Reed.

Jameis Winston drove Tampa down the field once again, and it looked like he had completed a touchdown pass to second-year receiver Mike Evans, but it got called back for a 10-yard offensive pass interference penalty. On the proceeding third down, Winston took an eight-yard sack, forcing Connor Barth to kick a 45-yard field goal.

The following two possessions resulted in field goals for both teams, bringing Kirk Cousins onto the field one more time with a 30-24 deficit and 2:27 on the clock. The 27-year-old QB promptly completed eight-straight passes for 70 yards, putting Washington on the six-yard line with 36 seconds left in the game.

After Winston’s last-ditch effort to lead Tampa into field goal position failed, Cousins was visibly fired up from his third career game-winning drive. On the way to the locker room, this video was recorded, and instantly put into the Louvre of Kirk Cousins forever:

Flash forward seven years later, and Kirk Cousins continues to put up some big moments like this. In 2022 alone, he has three game-winning drives and has helped the Vikings earn a 5-1 record going into their bye week.

For the Vikings to reach their ultimate goal of a Super Bowl, they will need him to continue to play at a high level. If he does, there will certainly be plentiful cheers of “You like that?!” throughout Vikings fandom.