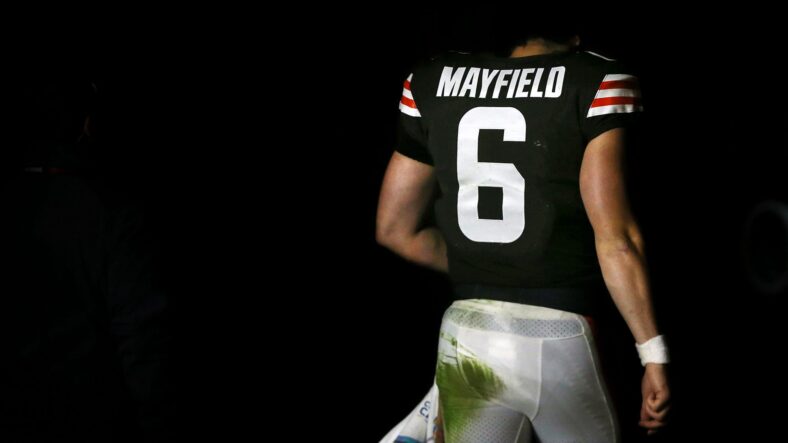 ESPN´s Dan Graziano started the chatter about the Vikings trading for Baker Mayfield about four weeks before the news emerged that he was traded to the Carolina Panthers for a 2024 5th-round pick. He called the Vikings a possible trade destination.

“They’re set this season with Kirk Cousins but could move on from him after the year. This is an example of a place where Mayfield or Garoppolo wouldn’t start right away but could position himself as the team’s starter in 2023, the way Winston did with the Saints in 2020.”

News about the Panthers trading for Mayfield put the rumor regarding the Vikings to bed. The chatter, however, was utterly media-made and never made sense in the first place for various reasons.

The obvious thing has to be said first. Kirk Cousins is a better quarterback than Baker Mayfield. Mayfield had his best season in 2020 when he played well in the second half of the year. Kevin Stefanski took over, and the former first-round pick immediately posted a career year. He finished the season with 26 touchdowns and just eight interceptions after throwing to the wrong team 21 times in 2019.

Cousins, meanwhile, throws for at least 30 touchdowns and about 10 interceptions annually. Last year, Mayfield dealt with injuries, and his 17 scores and 13 interceptions are no match for the Vikings passer, as he had a 33-7 ratio.

Unlike Mayfield, Cousins can light up any team in the NFL on any given week, while his worst games are still better than Mayfield’s worst. The Vikings passer is also more consistent. Mayfield comes off a season in which PFF graded him as the 30th best of 37 eligible quarterbacks. Cousins was 6th.

In the advanced stat DYAR, Cousins was the 7th best QB in the NFL and Mayfield 23rd. Even in Mayfield’s career year 2020, he was 16th, while Cousins ranked 9th.

Mayfield has a career passer rating of 87.8. Cousins owns a rating of 98.6. The circumstances the quarterbacks were surrounded by were different. Cousins had elite receivers and a poor offensive line, Mayfield, meanwhile, had a subpar receiving corps and elite offensive lines. However, the big differences in the stats can’t be explained by the surroundings.

Replacing a good quarterback with a worse one doesn’t make sense for a team trying to get better. The gap in performance between the two is not even close.

Timing of the Trade

A trade this offseason didn’t make sense for the Vikings. The Browns picked up the fifth-year option for their quarterback. Therefore, he becomes a free agent after the season. If Kwesi Adofo-Mensah wanted the passer, he could just wait and sign him in about nine months without giving anything up.

Also, if the Vikings wanted him to be their Cousins successor, they can’t risk losing him in free agency next offseason. The timing just doesn’t fit.

In addition to that, Cousins has a no-trade clause. So the organization can’t just move on. He would have to waive his clause. Otherwise, he’s the signal-caller for two more seasons.

Mayfield is not the type of quarterback teams want as a backup. He is ultra-competitive, which is a good thing in most cases. A backup QB, however, has to be a calm assistant to the starter. Mayfield is the type of competitor that would complain about not playing. He’s hard to imagine in a backup role and could cause some problems.

He also shouldn’t make the starter uncomfortable because a whole fan base wants the backup on the field. Again, Cousins is the better player and would be the unquestioned starter even with Mayfield in town. But after a bad performance, fans would demand a change. That’s not a distraction teams want.

He makes much more sense in Carolina, where he can start and compete at the highest level to save his career, than as a backup quarterback without many chances to play. QB2 behind Cousins is not a job that gives players many opportunities to see the field. Since he became a full-time starter in 2015, only Matt Ryan played in one more game than Cousins.

Not trading for the former first overall pick was a wise decision. The rumors were completely media-driven and didn’t make much sense. The Vikings have two seasons with Kirk Cousins, who is a good option at quarterback.

Depending on his play in 2022, the team could try to sign another extension or choose a quarterback in the next draft. The rookie could sit for one season behind Cousins and learn from the veteran before he takes over. That timeline fits much better than a trade for Mayfield, and a chance to find an elite quarterback in the process is higher than to see massive development of the now Panthers signal-caller.