Give Him Credit: Kwesi Adofo-Mensah Put His Money Where His Mouth Is 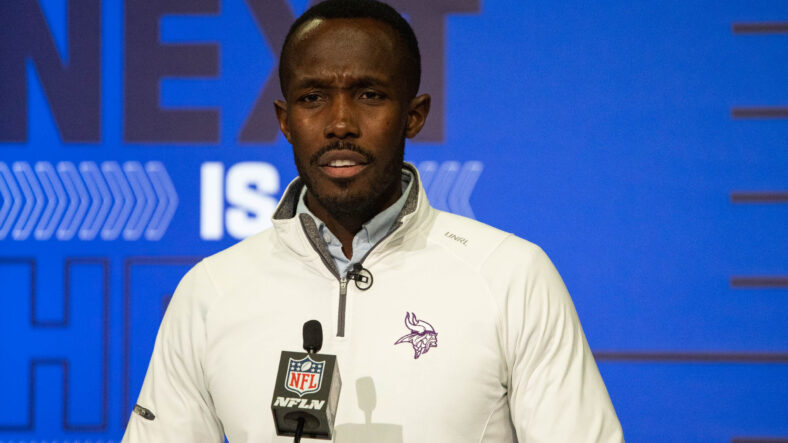 Kwesi Adofo-Mensah’s first draft as the Minnesota Vikings GM was not without controversy.

Fans, writers, and even NFL executives voiced concerns about Minnesota’s approach. Foremost among these concerns is the decision to do deals with both the Lions and Packers.

Previously, I’ve articulated my misgivings about the Lions deal and support for the Packers deal. I won’t rehash those things in much detail. Rather, I’ll point out that Adofo-Mensah delivered on some of the promises he made since taking the job.

It didn’t take long for the Vikings’ new GM to start using terms like “consensus,” “collaboration,” and being able to “make decisions under uncertainty.” The Packers deal shows us that he wasn’t bluffing. According to Chad Graff, Adofo-Mensah was leaning toward accepting the identical offer from the Packers at pick #32:

At the end of the first round, just before the Vikings decided to select Lewis Cine, the Packers surprised them with a trade offer. They wanted to move up for wide receiver Christian Watson. Adofo-Mensah, according to a source, wanted to take the deal because the team’s draft charts said the Vikings were getting more value. But collaboration won out, and Adofo-Mensah was talked out of giving the team’s biggest rival the speedy receiver it coveted.

Apparently, he believed that the 53rd and 59th were more than worth it to trade completely out of the opening round. He could have flexed his GM muscles, forcing others to simply go along with his decision. He is, after all, the man who’s in charge. Instead of doing so, Kwesi Adofo-Mensah deferred to his staff, allowing their collective voice to trump his own.

In the end, one has to think Minnesota was rewarded. They snagged a great player in Lewis Cine, tacking on the added benefit of the fifth-year option by staying in RD1. Just a couple picks later, the Vikings got the exact same offer from Green Bay. Kwesi’s willingness to actually adhere to the maxims he has been preaching likely left all parties happy.

By no means do fans need to agree with his decision trade with the Packers. Nevertheless, we need to respect that he actually allowed collaboration and consensus to influence his decision making when presented with an uncertain scenario.