Four Vikings That Must Show Out This Weekend

The Minnesota Vikings will play their final preseason game on Saturday night in Denver against the Broncos. Then, the final roster cutdown from 80 players to 53 will occur on August 30th. There are many players that arguably could be on the bubble heading into this preseason finale, needing big games to save their roster spots. Here are four Vikings that must show out this weekend to ensure that they land on the final roster.

The Vikings didn’t trust Kellen Mond enough with the QB2 job that they went out and traded for Nick Mullens. Other than the fourth quarter of the Raiders game, it’s been a very tough preseason for the 2021 third-round pick. If this game against the Broncos doesn’t go well, there’s a very real possibility that the Vikings could cut Mond in order to get their roster down to 53 players.

After being one of the training camp standouts ahead of the 2021 season, Oli Udoh finds hiimself in the opposite position in 2022. Blake Brandel largely has outperformed the veteran offensive lineman, and Vederian Lowe has the advantage of being a young player with long-term upside. After starting at multiple positions along the offensive line last year, Udoh is on the bubble going into the final preseason game.

There are a few players at the wide receiver position that might be helped by a big game this week. The first five wide receiver spots seem to be set right now, but that sixth spot may be up for grabs going into the final preseason game in Denver. Jalen Nailor has the advantage of being a special teams contributor as well as a receiver on the offense, so if he can make a few plays on Saturday night that so will help his cause for staying on the roster.

With the emergences of TY McGill and Jonathan Bullard along the defensive line, suddenly the Vikings are running out of spots at the position. Jaylen Twyman had a relatively quiet game last weekend against the 49ers, so he may have something to prove heading into this matchup with Denver. 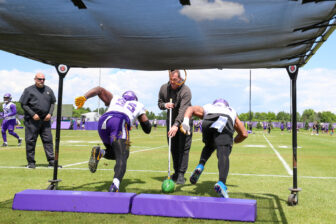