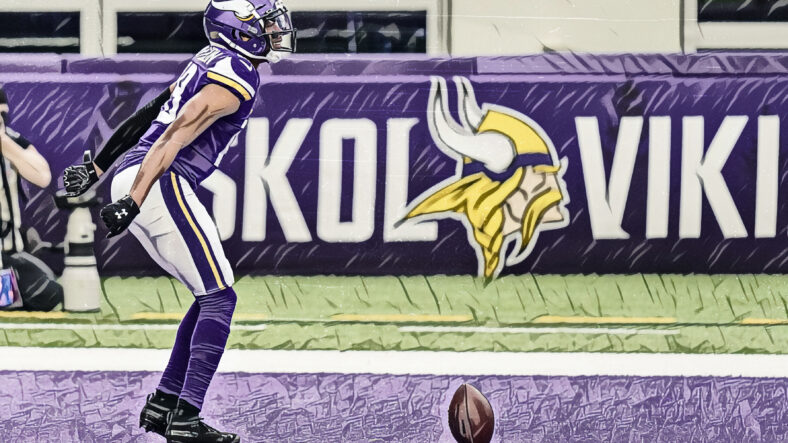 No wide receiver has ever won the NFL MVP award. The last non-quarterback to win the prize was a Minnesota Vikings player named Adrian Peterson in 2012. A defensive player hasn’t taken home MVP hardware since 1986. Lawrence Taylor.

Indeed, the NFL MVP award is largely a “best quarterback in the league” trophy, but that’s not stopping Vikings wideout Justin Jefferson from receiving “dark horse” mentions for the distinction.

Jefferson, 22, leads the NFL in receiving yards (3,016) during the last two seasons, coincidentally his first two campaings in the league. Those 3,016 yards are also the most by a wide receiver ever through a player’s first two seasons.

So, Jefferson is on a righteous path, joining Minnesota after former general manager Rick Spielman traded Stefon Diggs to the Buffalo Bills in 2020. Diggs was disgruntled about his role in the Vikings then-run-first offense, so Spielman shipped him to New York state and gained Jefferson, Kenny Willekes, Camryn Bynum, Janarius Robinson, and Zach Davidson in return.

Diggs has thrived in Buffalo, perfectly pairing with quarterback Josh Allen who — almost to the minute of Diggs’ arrival — blasted into superstardom. The Vikings received a best-in-the-NFL caliber WR on a cheap contract for five years.

And that “best in the NFL” classification isn’t just fodder from a Vikings website. It’s a question asked globally heading into the 2022 season.

NFL.com even listed Jefferson as an unsung MVP candidate last week. Adam Schein of NFL.com ranked Jefferson eighth in his MVP pecking order, explaining, “Minnesota can surprise people this year with a great new head coach and a fresh infusion of new energy. Jefferson is an alpha dog. His impact goes beyond even his gaudy numbers.”

Jefferson was assigned 125-1 odds for the 2022 NFL MVP award, meaning the overall likelihood is a tremendous longshot. Still, Jefferson was the only wide receiver marked for MVP candidacy by Schein. One other non-quarterback made the list — Aaron Donald from the Los Angeles Rams.

The Vikings will showcase a brand new everything in terms of leadership in 2022. The franchise moved on from Mike Zimmer and Rick Spielman, two men who exalted the riches of playing suffocating defense and running the football. Correspondingly, the Jefferson-MVP chatter occurs when Minnesota adopts a different offense, molded by new head coach Kevin O’Connell.

O’Connell came from the Super Bowl-winning Rams, the latest installment from the ever-budding Sean McVay coaching tree. If Jefferson somehow wins the MVP award this season, it will be thanks to O’Connell’s playcalling and quarterback Kirk Cousins’ distribution of the football.

And for those keeping score at home, Cousins actually has better odds to win MVP, besting Jefferson’s 125-1 moneyline with a 50-1 ratio.

The Vikings play the Green Bay Packers in Minneapolis on September 11th to start the season.

Packers quarterback Aaron Rodgers holds the second-best odds (8-1) to win the MVP in 2022, which would be his fifth receipt of the prize.