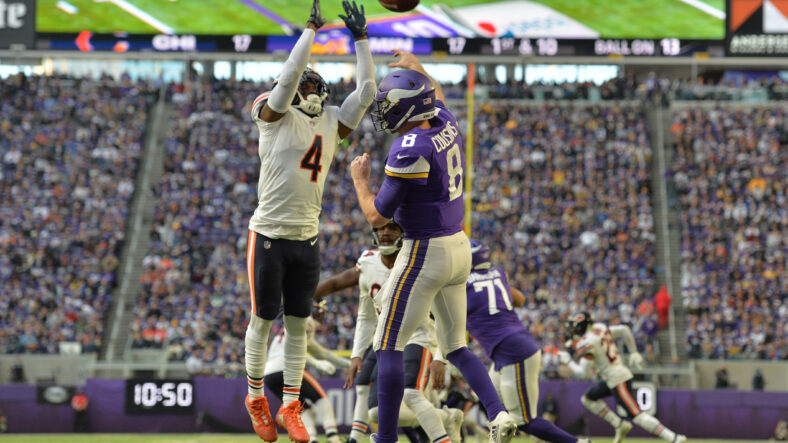 The Minnesota Vikings and Chicago Bears are set to face off on Sunday at U.S. Bank Stadium. Minnesota is currently 3-1 and has won their past two games, while Chicago is 2-2 and coming off a 20-12 loss on the road to the New York Giants.

Minnesota leads the all-time series 63-57-2, including winning the past two.

This is a game the Vikings should win, but divisional games are not always easy. Starting 4-1 and 3-0 in the division would be a great way to start a season, especially with a first-year head coach. Time will tell how the rest of the season goes, but if they keep winning, they could win more games than many expected.

The way they have won these past two games has not been very impressive, but in the end, they still won, and there is still plenty of time to improve. You have to think, though, that Vikings fans would really enjoy a blowout win this week, given these past two wins have been nailbiters.

The last two times these two teams faced each other came in week 18 last season in Minnesota. The Vikings won 31-17.

On defense, Anthony Barr recorded a game-high 11 tackles and two sacks in his final game with the team after being drafted ninth overall by them in 2014. D.J. Wonnum and Kenny Willekes also recorded two sacks. Patrick Peterson returned an interception 66 yards for a touchdown.

“Bittersweet to end this way, but it kind of is what it is, you know?” linebacker Anthony Barr said. “It’s been a pleasure being a Viking for the last eight years. I’m not too sure what the future holds, but whatever it is, I’ll always have a special place in my heart for Minnesota.”

For Chicago, Andy Dalton went 33 for 48 for 325 yards, one touchdown, and two interceptions. David Montgomery rushed for 72 yards on 20 carries. Darnell Mooney caught 12 passes for 126 yards.

The Bears finished the season at 6-11, while the Vikings finished 8-9 and missed the playoffs for the second consecutive season.

The very next day, the Vikings moved on from head coach Mike Zimmer and general manager Rick Spielman.

So far, things are going well with the new regime. O’Connell and general manager Kwesi Adofo-Mensah are off to a nice start. How will things go for the rest of the season and the next few years? That will be very interesting to find out. In the end, changes were needed in the organization.