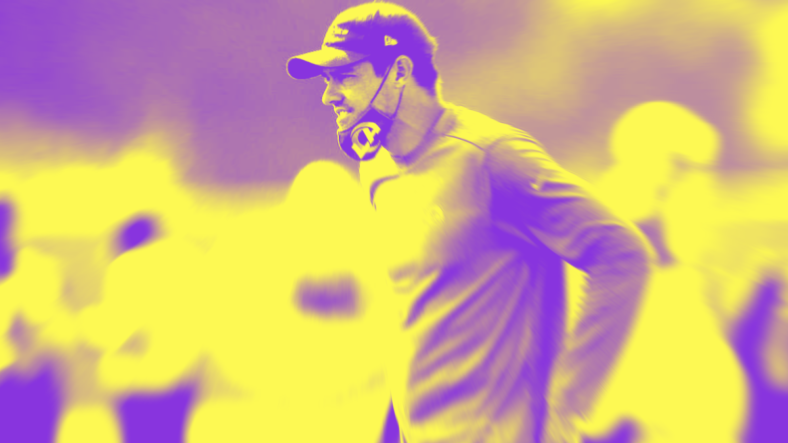 The Minnesota Vikings were the final team to hire a head coach this cycle, signing on for the services of Kevin O’Connell from the Los Angeles Rams. O’Connell and his Rams were triumphant over the Cincinnati Bengals, 23-20, in Super Bowl LVI.

For a little less than a week, the team trended toward hiring Jim Harbaugh from the University of Michigan, but the plan fell through when the Vikings did not offer the former San Francisco 49ers coach a job. And immediately after Harbaugh was on a plane back to Michigan – where he later signed a contract extension – Minnesota reportedly agreed to terms with O’Connell. So, fans who experienced temporary Harbaugh heartbreak quickly made a pivot to O’Connell and the optimism he would eventually inject.

However, fans had to exist in limbo, merely hoping the reports of O’Connell’s purple hire were accurate. Nothing could be made official until after the Super Bowl.

Alas, that time is now.

O’Connell was formally hired by the Vikings on Wednesday, transitioning to a new era from a decade of defense-first operations under Leslie Frazier and Mike Zimmer to offense-now with O’Connell. His background is offensive dealings – and offense only.

Upon arrival to Minnesota, O’Connell said, “I greatly appreciate the Wilf family Kwesi and the entire Minnesota Vikings organization to be their next head coach. This is a franchise with a deep history and a tremendous fanbase. I am committed to working tirelessly to bring them a Super Bowl championship.”

Here’s the video from Wednesday:

That’ll be the expectation, a Super Bowl trophy. The Vikings are the best team in the NFL – by far throughout history – to never win a Super Bowl. In fact, per wins and losses, Minnesota is the fifth-best franchise in the Super Bowl era, but the organization has no Super Bowl wins. It’s misery.

Next up for O’Connell and his snazzy offense-first enterprise? Free agency. Players can return to old teams or find new ones in less than four weeks. “Legal tampering” begins on March 14th, and Minnesota must move a lot of money around in order to sign free agents in March. The Vikings are over the cap by about $15 million – the fourth-worst situation in the league as of February 17th.

Foremost, Kirk Cousins and Danielle Hunter’s contracts will need attention. Those two men are the money magnets, so their deals will be addressed early on. The men can be extended, spreading money over additional years – or traded for draft capital. Because Cousins’ cap hit is the largest on the roster, the decision on his future is the next major Vikings domino to monitor.

O’Connell has ties to Cousins – he coached the quarterback in 2017 with the Washington Commanders – so the working theory suggests Cousins will return to the Vikings for a season or two. Those topics typically arise in the interview process.

O’Connell is the 10th coach in Vikings history.