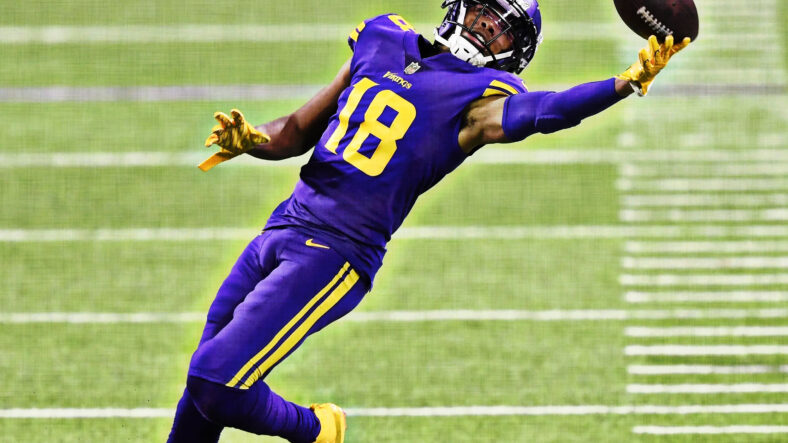 Most big-name free agents have new homes with free agency two months in the rearview, and the 2022 NFL Draft is in the books.

The next step is training camps for all teams, and the NFL schedule progressively hits the wire this week.

Below are NFL power rankings, a post-draft edition. If one is curious why the Minnesota Vikings live where they’re at, well, it’s because the fruition of the team playing under new head coach Kevin O’Connell actually has to occur. Right now, it’s just a hopeful honeymoon.

The Texans are trusting the enterprise to Davis Mills, a 3rd-Rounder who was ho-hum during his maiden voyage. This feels like a 1990s NFL solution.

Self-inflicted rebuilding is on the way, and Seattle is biding time for the 2023 NFL Draft. At least we’ll find out once and for all if Drew Lock is a QB1.

The Jaguars spent a lot of money in free agency, but it was like buying compact discs in 2022. They work, but was the spending practical?

The Mariota Show into Desmond Ridder will be fun, but the Falcons scream 5-12 or so.

Bears fans arrived at a solution that a slow rebuild is ingenious — an interesting prognosis for a young quarterback on a coveted rookie deal. Fields’ full potential will evidently be on display in 2024 or 2025? Does the Windy City have the patience for that?

This team has a wonderful defense with Sam Darnold at quarterback — and Matt Corral waiting to take over. Probably a 6-11 squad.

The Giants can climb this list rapidly if Brian Daboll knows what he’s doing. But Daniel Jones and the aforementioned Drew Lock are in the same boat — are they any good?

The roster talent is stupendous. But do you trust the Jets to make noise? No, you don’t. Everyone loves New York’s draft, but all of this hype boils down to Zach Wilson’s development. It must happen fast, according to the modern NFL. Otherwise, he’ll be pegged as no good because men like Justin Herbert and Joe Burrow set the bar so high.

This is a good little football team, suddenly outfitted with WR weapons and solid OL and DL trenches. Raise a glass for Jared Goff?

Carson Wentz will likely guide this team to 7-10.

Mike Tomlin won’t allow a losing record, so the Steelers will make the 2022 season interesting as Kenny Pickett develops.

Like Wilson and the Jets, this all depends on Hurts. He now has a WR corps, so excuses are gone. This is the year when you determine if Hurts is a long-term QB1.

Miami will be fun, so long as they don’t waffle on Tua Tagovailoa’s QB1 status. The defense is sturdy, and Tyreek Hill will provide 10+ touchdowns.

The Raiders have ZimmerViking-itis. They’re pretty good but not great. They have a 10-7 ceiling. Josh McDaniel has never actually been good as a head coach. Some just assume he will be this time. That has to play out, though.

This is a magnificent roster. Plain and simple. But the Colts will try to squeeze the prime out of Matt Ryan, which didn’t work with Philip Rivers or Carson Wentz. Why would it work now?

You will find out if Kirk Cousins undergoes a Staffordization under Kevin O’Connell. If he does, the Vikings will reach and make noise in the playoffs. If he’s truly a merchant of mediocre seasons, Minnesota will be done with Cousins very soon.

Quietly, the Patriots defense has been wonderful since Tom Brady left, and nobody cares. That won’t change this year, and Bill will be back in the playoffs.

The new villain. Kevin Stefanski and Deshaun Watson should flourish together, but the price tag is gargantuan. Cleveland is probably 10-7 or 11-6-ish if Watson isn’t suspended.

The Ravens drafted quite well in April, Lamar Jackson needs a bounceback year, and Harbaugh doesn’t miss the playoffs too often. Baltimore will be good again.

Some pundits are low on the Cardinals. Why? Murray is entering his prime, and the defense has playmakers. The Cardinals will put it together this season and not look like imbeciles in the postseason.

Another team with ZimmerViking-itis, the Titans play as Zimmer wanted to with the Vikings. But they actually win year in and year out. They won’t win a Super Bowl, but Tennessee will be relevant.

The 49ers are so good and built so well. Innovation, consistency, yadda yadda. The Deebo Samuel fuss is odd, and we don’t know the identity of the QB1. Regardless, they’ll be in the mix. That’s what Shanahan does.

Cincinnati will be bitten by the Super Bowl runner-up curse. Folks just can’t see it yet. They fixed the offensive line — what a novel concept — but the AFC is simply too good for the Bengals to re-reach the Super Bowl.

Dallas will be approximately 12-5 and disappointingly lose in the playoffs.

Folks still consider this team from Wisconsin as the cream of the crop. Yet, their roster is diminished, and the quarterback is almost 39. They’re not guaranteed to be elite.

The Chargers need to actually make the playoffs soon. It will happen in 2022 — in a robust AFC West. Herbert is fantastic, and the Chargers defense is peppered with talent. Now is the time.

A Super Bowl dark horse, Russell Wilson changed everything. Absolutely everything. How do the Broncos just waltz into offseasons and find Hall of Fame quarterbacks? It must be nice.

If Brady doesn’t suddenly look decrepit, they’ll be around in late January. That man is so brilliant, and this roster is too deep. Brady usually wins Super Bowls every other year. We shall see.

If Mahomes doesn’t get back to the Super Bowl in 2022, folks will wonder if they wrote his GOAT zoo admission pass too soon. We have a tip for the Chiefs. Don’t half-buttocks the thing on defense to start the season.

The mortgagers of the future with draft-capital trades are the NFC standard-bearer until they’re not anymore. Eventually, this enterprise will have a 2008 housing-burst-like reckoning but not quite yet.

The Bills have about 5-6 damn good pass rushers, a quarterback who will be MVP soon, Stefon Diggs, and Dalvin Cook’s little brother. If they don’t reach a Super Bowl soon, the new Bills curse will be losing before the Super Bowl.