Deebo Samuel to the Packers? Please No. 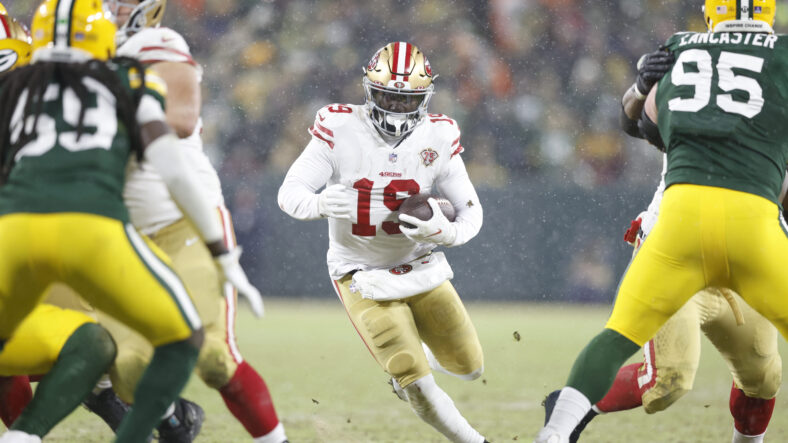 You have to love April leading into the NFL Draft. Some of the craziest things can and do happen all the time. This year has been loaded with blockbuster trades, and we are staring down the barrel of another. Deebo Samuel could become a Packer.

Rumors are swirling that contract negotiations between Deebo Samuel and the 49ers have taken a turn for the worst. Now, Deebo is requesting a trade. Who knows where he will end up if he is traded. However, Ian Rapoport said the Packers and the Lions are potential destinations.

Ok, let’s be honest. The Lions are not going to trade for him. They are a poverty franchise — the red-headed stepchild of the NFC North. However, Deebo to the Packers is a real possibility and something we fans should fear.

We all remember last year when Deebo absolutely wrecked the Vikings. The Vikings could not set the edge in that game. The result was Deebo getting the ball out of the backfield, sprinting to the sideline, and running straight through the Vikings’ defense.

Now, there is a real possibility that the Vikings could be seeing him twice per year. While we can hope this doesn’t happen, the Packers are in a prime position to make a deal. Not to mention the Packers traded away their best wide receiver and are in the market for a premium guy.

Deebo fits this role better than most. The worst part for Vikings fans is that Matt LaFleur would actually be able to utilize him as well as Kyle Shanahan has been able to.

How the Packers Can Get This Done

Now, they will have to pay him a mega-extension if they trade for him. This is not going to be a problem for them. They were already willing to pay Adams, so we would expect them to make an extension happen.

Currently, the Packers will have more than $50 million in cap space in 2023. They could easily make a $25 million per year extension happen. I mean, the salary cap isn’t real anyway.

As a Vikings fan, I hate all of this. The idea of the Packers having the combination of Deebo and Jones is scary. Both of these guys can catch and play running back. Oh, they also still have the two-time reigning MVP, Aaron Rodgers. That is a terrifying combination.

Hopefully, the 49ers can make a long-term deal happen. Or, at the very least, they trade Deebo out of the conference to the Colts, Patriots, or Steelers. However, the Packers are a real potential destination. All of this is happening just as we were happy to see all the good wide receivers leaving the NFC North.