Dalvin’s Brother Chats with Old Pal of the Vikings 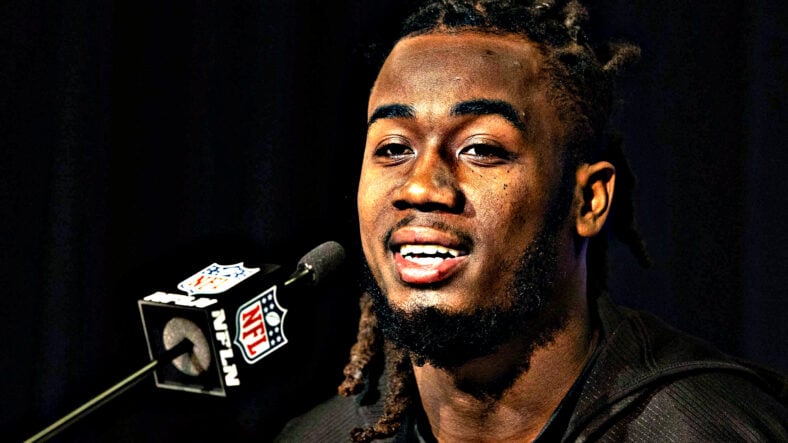 First, it was Dalvin, drafted by the Minnesota Vikings in the 2nd Round of the 2017 event. Since his entry into the business, the older Cook ranks sixth in the NFL for yards from scrimmage and 17th in touchdowns. Next to Adrian Peterson’s MVP campaign in 2012, Cook authored one of the greatest Vikings seasons ever by a running back in 2020, tallying 1,918 total yards and 17 touchdowns.

Now Dalvin’s brother, James, will get a crack at replicating his big brother’s body of work, likely learning his NFL destination on April 29th or 30th.

And there’s a reasonable chance that team could be the Denver Broncos, a team led by George Paton. James Cook met with Denver on Friday.

Under Rick Spielman, Paton was a long-time second-in-command in the Vikings front office. He had a front-row seat to Dalvin Cook’s theatrics and might want a DNA sequel with the Georgia running back.

Because the NFL has changed so much amid the last decade, running backs are no longer sure-fire prospects in Round 1. In the previous five drafts, just three halfbacks have been chosen in the Top 10 — Saquon Barkley, Leonard Fournette, and Christian McCaffrey. And, ask yourself, how much sizzle surrounds those men heading into the 2022 season? Exactly.

James Cook will likely be selected by a team in the 3rd or 4th Round, a prime territory for the Broncos to pounce. In fact, Denver seemed to start the current RB trend in the NFL some 25 years ago — draft a running back, utilize the man to the utmost, and then let him walk once his rookie contract expires. The tendency used to be a “Broncos thing” but was stolen by other general managers over the last decade.

Likely to start as RB1 sooner than later in his career, The Draft Network calls the younger Cook “a smooth runner who can seamlessly make cuts and make people miss without ever breaking stride.”

At Georgia in 2021, Cook notched 1,012 yards from scrimmage and 11 touchdowns, ultimately leading to a National Championship over the Alabama Crimson Tide.