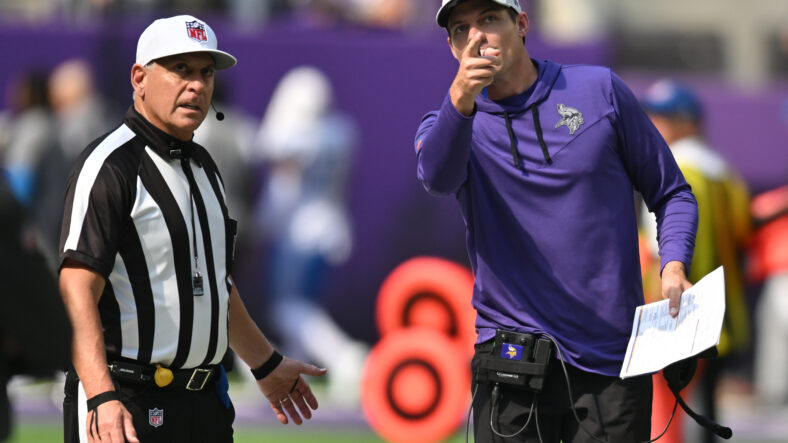 The Vikings started their season with an almost perfect record, despite the significant shifts in the offseason with a regime and culture change, including implementing new schemes on both sides of the ball. Nobody expected the team to come out of the gates that hot.

However, CBS Sports pumped the brakes this week on the talk about the Vikings as a contender. Jeff Kerr wrote an article, “NFL Week 6 overreactions and reality checks,” after the conclusion of the NFL Sunday, and he featured the Vikings.

His headline was “Vikings are a Super Bowl contender,” and he called it an overreaction. Only a few people thought the Vikings would even be part of a contender conversation early in the season. Most expected a mediocre start because of the many changes and a hot Vikings team later in the season. Fans universally would’ve taken a 5-1 record heading into the Week 7 bye week.

A lot of games have not been pretty and cost the average Vikings fan additional years to live because the team still can’t win convincingly. However, it’s not easy to win games in the NFL. Proof of that is the multiple teams that were viewed as contenders that have a .500 record at best. The best examples are Tom Brady’s Buccaneers, Aaron Rodgers’ Packers, and the Super Bowl champions Rams.

The Vikings needed just six games and one matchup against every NFC North team to get an almost insurmountable lead in the division. CBS Sports analyst Kerr acknowledged that.

The one loss in the campaign came against the Eagles on Monday Night Football in Week 2. After the final whistle, the scoreboard showed 23-7, but the game was much more lopsided. A heavily struggling Kirk Cousins and a defense that could not stop Jalen Hurts left fans questioning the whole season after just two games. Instead of piling up even more mistakes in the next game, a common reaction of recent Vikings teams, the team responded by winning four straight games.

But Kerr isn’t sold on the Vikings. He didn’t think that the win over the Dolphins came convincingly.

Minnesota certainly capitalized on Miami’s miscues, as a Jaylen Waddle bobbled ball led to a Harrison Smith interception and an eventual field goal. Waddle’s fumble after a long catch late led to another Miami turnover — taking more potential points off the board in a 17-16 game. The Vikings got 10 points off Waddle’s miscues.

Indeed, the Vikings didn’t win with great offense and stout defense. However, they won the game. Ed Donatell’s defense looked like an elite unit for the first time since Week 1 against the Packers. In the last few games, the defense allowed poor offenses to look great. But not this time. The pass rush took advantage of the bad duo of offensive tackles, the front stopped the run, and the secondary did just enough and took advantage of Miami’s mistakes. While Kerr thinks that the takeaways skewed the result, Vikings fans should be happy that the defense can have a dominant performance. Good teams in the NFL can win in different ways, and the Vikings just won behind a strong defensive outing.

“The Vikings are a good team, albeit, in a mediocre division, Kerr wrote. “They are not in the Super Bowl contending tier yet.”

Teams in the league can’t choose the division in which they compete. The Lions had one of the hottest offenses in the league in the first couple of games, and the Vikings took care of business. The Bears are rebuilding but have already won two games and are fighting to stay relevant in every game.

The Packers still have Aaron Rodgers at quarterback and are mostly the same team that won 13 games in three consecutive seasons. At the end of the day, the NFC North is not a cakewalk, and the Vikings should be applauded for leading the division by a wide margin. All division winners are Super Bowl contenders.

Kevin O’Connell has to have his team ready for the Arizona Cardinals after the bye week. There are certainly some things the team has to clean up, but nobody can take away the 5-1 record.