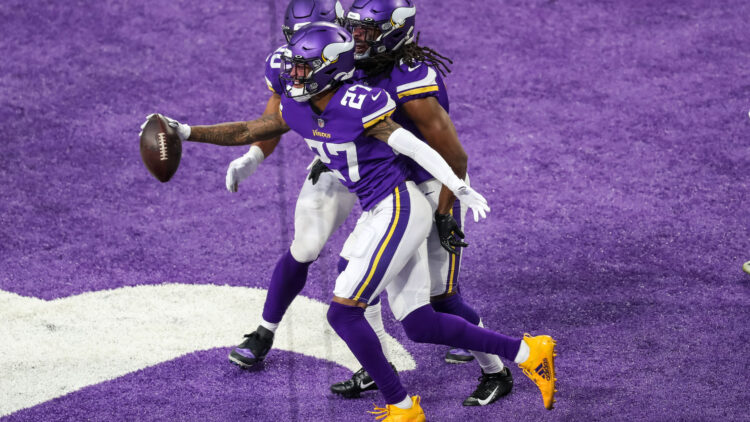 The state of the Minnesota Vikings Cornerback room does not look ideal.

The top player of that position group on the roster is the 2020 3rd round pick, Cameron Dantzler. After a slow start in his rookie year in 2020 and multiple injuries, he improved towards the end of the season. In the last games of his rookie campaign, he earned All-Pro level PFF grades while seamlessly locking down the opponent’s top wideouts.

To start the 2021 season, Dantzler was inexplicably benched for the struggling Beshaud Breeland. He was a surprise healthy scratch in Week 1. Dantzler filled in for the injured Patrick Peterson and at the end of the year for the released Breeland.

The second-year player earned the best grades of the Vikings CBs from PFF. But most fans probably remember him for allowing the game-winning touchdown of the Detroit Lions. Despite some flaws, he seems to have one starting spot locked up for now.

The other corners on the roster are Kris Boys, Harrison Hand, and Parry Nickerson. None of them has shown to be more than backups so far in their careers. Improvement is always possible, but it is certainly not something the Vikings should count on.

The 2019 7th rounder Kris Boyd was targeted 28 times in 2022 and allowed 22 receptions. He earned a terrible PFF grade of 39. One of the most remembered plays was a taunting call against him when the Vikings played the Steelers. The Steelers were awarded an automatic first down, instead of facing a 3rd &12, and it almost led to a historic collapse by the Vikings. He received heavy criticism from coaches and teammates, most notably Anthony Barr, immediately after the play.

Despite the struggles of his teammates, Harrison Hand only played on two defensive snaps in 2021. Not getting on the field when his teammates performed poorly is not a good sign. He might be best suited as a special teams player.

The 27-year-old Parry Nickerson only played 17 total plays on defense in the 2021 season. He had a hard time getting on the field in his entire four-year career to this point.

The Vikings need to do something to improve their cornerback room.

There are three ways to upgrade the position: New General Manager Kwesi Adofo-Mensah can acquire a CB via trade, like the Dolphins Xavien Howard, sign the 2021 Viking Patrick Peterson, or a different free agent, and he can add a player through the draft.