Boom. 5 Vikings Made the Pro Bowl.

Pro Bowl voting is a big event every year, as the NFL counts votes on Twitter, generating a lot of engagement because fans want their team’s players to be a part of the event. The NFL changed the event to a flag football game and some skills challenges this season.

That change was absolutely necessary because players didn’t take the game seriously enough to make it exciting. The reasons for that were understandable — the players want to go into the offseason healthy after a long season. Like last year, the event will occur in Las Vegas the week before the Super Bowl.

Vikings fans were among the best at voting for their players. Only the 49ers players received more votes. Unfortunately, the fan votes count only for one-third, while players and coaches will decide the other two-thirds. Players, especially, are happy about the recognition because it shows that they are respected in league circles, and it helps them in contract negotiations and for legacy building after their careers.

Five Vikings were named to the Pro Bowl:

Kirk Cousins is now a four-time Pro Bowler. His numbers are down from recent years, but he has started to get hot in recent weeks and threw for over 400 yards in back-to-back games — the 885 yards are the most in Vikings franchise history in consecutive games. His late-season surge could be because he is starting to be more comfortable in the new system.

Justin Jefferson is one of the elite players in the league and quite possibly the best wideout in football. He went to the Pro Bowl in each of his first two career seasons. Currently, Jefferson is leading the league in receiving yards by 94 yards. The franchise record for receiving yards in a single season is within shouting distance, and even the NFL record is possible, just like the first 2,000-yard season in NFL history.

Boom. 5 Vikings Made the Pro Bowl.

T.J. Hockenson has been a huge part of the Vikings since the team traded for him just before the deadline approached. He is second in the NFL in receiving yards amongst tight ends, trailing only Travis Kelce. Hockenson turned into a second wide receiver at times. He is a critical security blanket, especially on third downs, and is taking some pressure off Justin Jefferson. The tight end is a two-time Pro Bowler.

Za’Darius Smith is a culture changer. His positive attitude is a massive part of the great Vikings locker room. Smith is leading the league in quarterback hurries and has recorded 10 sacks so far. Together with Danielle Hunter, he is forming one of the top edge rushing duos in the league. The former Packers is a three-time Pro Bowler.

Andrew DePaola came into the league in 2012 and was just voted to his Pro Bowl. It’s hard to judge long snappers, but all of his snaps have come out clean, and he made three tackles. DePaola was out of the league a few years ago after tearing his ACL, but the 35-year-old made a comeback and received his biggest career honor.

A few other Vikings certainly deserved a nod. Some are alternates if someone can’t go to the Pro Bowl because of injuries or participation in the Super Bowl.

Dalvin Cook lost some of his explosiveness in the eyes of some. The running back went to the last three Pro Bowls but now had to give room to Miles Sanders, Tony Pollard, and Saquon Barkley. Left tackle Christian Darrisaw turned into a superstar left tackle in his second campaign but didn’t get past Lane Johnson, Tristan Wirfs, and Trent Williams.

Garrett Bradbury is an interesting choice. Many Vikings fans called for his replacement, but the Vikings coaching staff refused. He’s having a career year and is now a Pro Bowl alternate. His development will earn him a lot of money, as he is a free agent after the season.

Six-time Pro Bowler Harrison Smith only missed the 2020 Pro Bowl since 2015, but this could be his second absence. 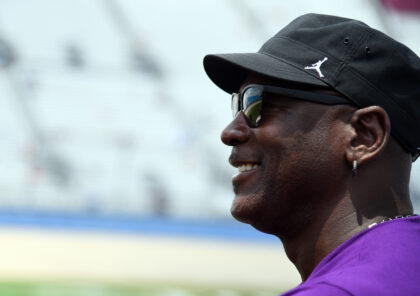 Also Read:
Justin Jefferson Compares Himself to a GOAT