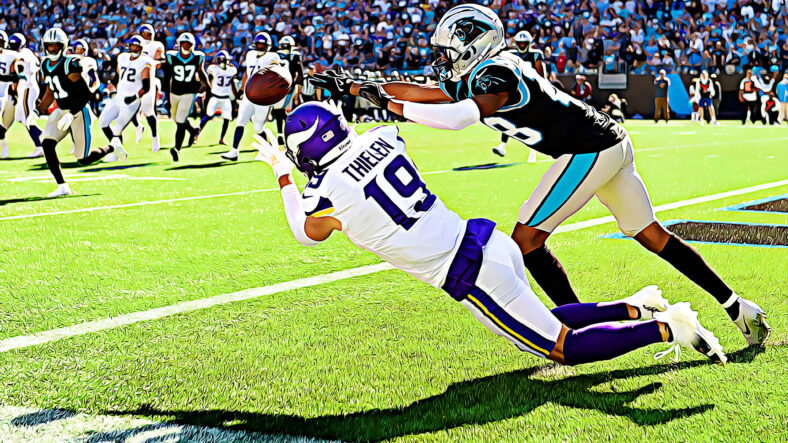 Minnesota Vikings wide receiver Adam Thielen returns in 2022 at age 32 for his first season [as a regular season participant] without Mike Zimmer at the helm.

Zimmer was terminated in January after back-to-back mediocre seasons. In 2020 and 2021, Minnesota was “all-in” via roster construction but floundered to a 15-18 (.454) record. Accordingly, Vikings brass fired Zimmer and his boss, Rick Spielman.

And, evidently, Theilen is on board for the Adofo-Mensah and O’Connell experience. He used the word rejuvenation this week when speaking to Fox Sports 9 in the Twin Cities, “When I talk about a breath of fresh air and kind of rejuvenation, it’s because when you get out here, it’s like stuff makes sense and it’s exciting.”

Thielen’s rejuvenation sentiment makes all the sense in the world. Last week, the world all but confirmed Zimmer’s various “doghouses,” which housed players like Cameron Dantzler and Kellen Mond in 2021. Early on after Zimmer’s exodus, linebacker Eric Kendricks labeled the old system and culture as “fear-based,” an atmosphere closer to Bobby Knight’s methods than modern NFL standards.

In fact, Thielen was one of the few to lament Zimmer’s departure a bit, asserting the team was in better shape now than when he left in 2014, the year Zimmer took over. Still, Thielen is rejuvenated about the change, probably because the new coaching staff will cater to Thielen and offense more. Zimmer was notoriously “defense first” in a league trending toward “offense first.”

While the energy in Eagan is rejuvenated, national eyes and ears peg the Vikings as “same ‘ol, same ‘ol.” Minnesota won eight games in 2021, and most sportsbooks theorize the Vikings as an eight or nine-win team for 2022.

Therefore, if Thielen’s personal revitalization comes to fruition, the Vikings will defy odds along the way. Minnesota is even a two-point home underdog for Week 1. The Vikings take on the Green Bay Packers on September 11.

On an individual front, Thielen seeks to notch his first 1,000-yard season in four years. He hasn’t broached the 1,000-yard mark since 2018, Kirk Cousins’ first campaign in Minnesota.