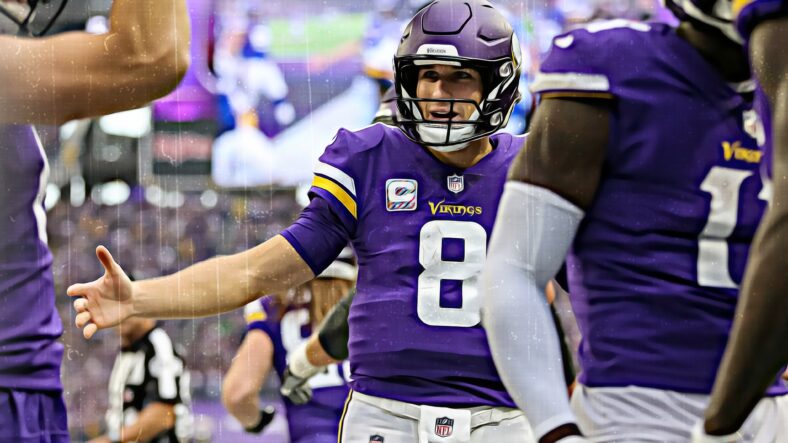 Josh Allen of the Buffalo Bills and Patrick Mahomes from the Kansas City Chiefs are the frontrunners to win the 2022 NFL MVP award, according to VegasInsider.com.

Sixteen spots below lives Minnesota Vikings quarterback Kirk Cousins, who enters his fifth season with the organization this September. Cousins has a +5000 moneyline to win the award.

Last year, Cousins was responsible for 4,221 passing yards, 33 touchdown passes, and seven interceptions. The Vikings finished 8-9 thanks to abysmally bad situational defense at the end of halves, and just like that, Cousins was leading a team hovering around .500 once again.

Not a frontrunner to win the MVP award, Cousins will command an offense with new coaching. The Vikings fired Mike Zimmer after the 2021 campaign as the team had grown stale. The defense was no longer ferocious, Zimmer was a defensive-minded head coach, and the future was no longer bright. Like a pendulum, Minnesota hired an offense-first skipper named Kevin O’Connell, a Super Bowl champion in 2021 with the Los Angeles Rams. Paired with Rams head coach Sean McVay, O’Connell offensively coordinated Matthew Stafford, Cooper Kupp, Robert Woods, Odell Beckham, and others.

And O’Connell has ties to Cousins from the Washington Commander days. Cousins was the pupil, and O’Connell was the quarterback coach in 2017. Together, they hope to unlock the full potential of Cousins as some theorize the 33-year-old was “held back” in a Zimmer defense-first system.

These are the most likely men (and accompanying moneyline odds) for Cousins to conquer if he has the MVP trophy on his mind:

Cousins would need a Matthew Stafford-like about-face to win an MVP award. Many NFL pundits consider Cousins an average quarterback incapable of leading a team deep into the playoffs. Before joining the Rams in 2021, Stafford led the Detroit Lions to a 74-90-1 (.451) record.