What about Olabisi Johnson? 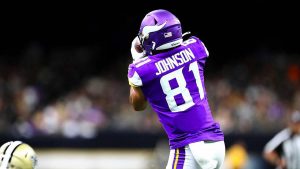 Drafted in the seventh round back in 2019 by the Minnesota Vikings, Olabisi Johnson enjoyed his start to life in the National Football League, encountering a debut season well over the expectation of a seventh-round pick.

Unfortunately, Year 3 didn’t go to plan as a torn ACL in training camp caused him to miss the entire 2021 season. Consequently, there was an emergence of KJ Osborn and a promising end to the season from rookie Ihmir Smith-Marsette. So, what does the future hold for Olabisi Johnson?

He has become the forgotten man of the Vikings offense. During the first two years of his NFL career, he played every game for Minnesota, including nine starts. During his rookie season, he had a stat line of 31 receptions for 294 yards and three touchdowns. He started six games deputizing for the injured Adam Thielen. In short, it was an exceptional season for a seventh-round rookie.

Year 2 had a more auspicious start as he was named starting wide receiver next to Thielen — ahead of first-round rookie Justin Jefferson. In hindsight, it put Johnson in a no-win situation. In the season opener against Green Bay, he caught 3 of 4 targets for 56 yards, his highest yards in a game to that point. The belief that Justin Jefferson would do better was unanimous and, of course, proved to be correct. By Week 3, Jefferson assumed the starting role he should have held from the beginning.

He would start one more game in 2020, once again deputizing for Adam Thielen in Week 11 against the Carolina Panthers. He would have the best game of his career to date, catching all seven targets for 74 yards. After two seasons, Johnson had stats of 64 targets, 45 receptions for 483 yards at an average of 10.7 yards per reception, and three touchdowns. That’s an encouraging stat line, and he had shown himself at the very least a capable backup who could fill in seamlessly for an injured starter — a valuable player to any roster and the type of guy the Vikings need more of on the roster.

The phrase “what have you done for me lately?” gets thrown around a lot in the modern NFL — and in sport in general, truth be told. After a year out, Olabisi Johnson will be desperate to get his chance to impress the new coaching staff, while also reminding Vikings fans what he can do. With there likely being more emphasis on the passing game under Kevin O’Connell, there may well be enough room for a fifth capable wide receiver on the roster and enough of a role to make some impact.

Olabisi Johnson’s skillset offers something different from the other wide receivers on the Vikings depth chart. Johnson does his best work at the line of scrimmage, creating separation early in his routes, leading him to have a lot of success in the short and intermediate passing game, as Jefferson, Thielen, Osborn, and Smith-Marsette provide an insanely dangerous deep threat.

It’s that short-intermediate area where Johnson can carve out a role with a coaching staff that I believe will be inventive at creating plays for all the players they have at their disposal. The chances might not come thick and fast, but there will be opportunities for a player like Johnson.

I believe, assuming he comes back fully healthy, the future for Olabisi Johnson is a place on the Minnesota Vikings 53-man roster at the start of the season. When he gets the chance, he will impress the new coaching staff sufficiently to earn his place.