Should the Vikings Draft Dylan Parham as Developmental Center? 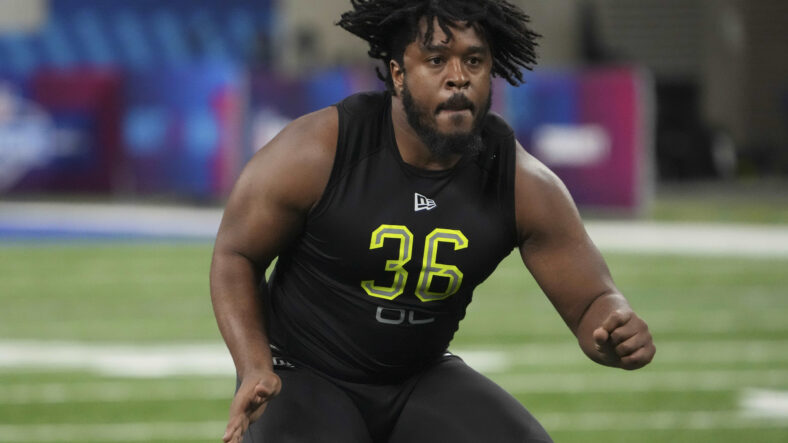 Honestly, Parham has never been on my radar, but as we are deep into mock draft season. The frequency of his name appearing on my social media timelines caught my eye. So, I decided it was worth looking at whether the Vikings should draft Dylan Parham as a developmental center?

The hunger from Vikings fans to move on from Garrett Bradbury is strong. However, I don’t expect that to happen this season. Drafting Tyler Linderbaum in the first round looks extremely unlikely. A significant free agency acquisition of JC Tretter would seem more likely but still improbable. Picking up a center in the draft to develop seems more likely.

That is where Dylan Parham comes in.

He is not ready to start in the NFL and would be a developmental pic — a former linebacker and tight end who also played basketball and competed on the track. Parham does not have the background of your typical offensive lineman. He played at both tackle and guard in college, but the consensus is he is best suited to center in the NFL.

Unsurprisingly, given his background, his athleticism is where his strength lies. This is what The Draft Network has to say about him:

“He is a smooth operator with nimble feet and is extremely flexible. As a pass blocker, his athleticism shines. He easily frames defenders and has the foot quickness to slide and mirror pass rushers. As a run defender, Parham is a technician that does well to establish body positioning. Parham offers great overall range as a blocker. The concerns with Parham stem from his lack of mass and functional strength. He needs to bulk up and get stronger to maximize his opportunity in the NFL. Parham won’t be a fit for all teams and he projects best to a zone-blocking run scheme. Parham has plenty of intrigue for what he can become in the NFL, but it will require the right nutrition plan, time spent in the weight room, and adjusting to more bulk on his frame.“

The thought of a reportedly undersized center might cause alarm bells to ring for Vikings fans. However, it is worth noting that The Draft Network has him at 6’3 and 313 lbs. Garrett Bradbury stands at 6’3 and 300 lbs, so Parham already has size on him if he can add to his size and keep that athleticism to go along with his strong technique.

He would undoubtedly be a perfect fit for a team running a wide-zone offense. Having at least a year behind Bradbury to bulk up and develop would be a good situation for the player to find himself.

Dylan Parham is expected to come off the board in the third round. That poses two problems for me. Some better players can have a more immediate impact and will be available on Day 2 of the draft. It also brings him into direct competition with Nebraska center Cam Jurgens, who brings the same qualities to the table. Despite being slightly smaller at 303 lbs, he does have three years of starting experience at the center position behind him — something Parham doesn’t have.

The only way I see the Vikings taking a development center this early in the draft this year is if they have bolstered their Day 2 picks with a trade or two — a scenario that is not unlikely.

So, should the Vikings draft Dylan Parham as that said developmental center? He is not a player I would be going out of my way to make sure I get. If the cards fall just right, the Vikings pick him up. In time, it could prove to be a very shrewd move.