We need to talk about the Vikings Plus-Sized Punter 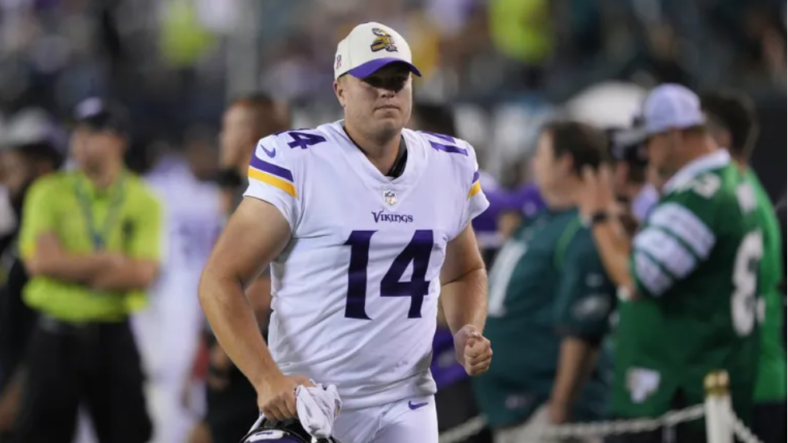 He’s been affectionately named “The Plus-Sized Punter” by the voice of the Vikings Paul Allen due to his 6-foot, 3-inch, 245 pound frame, but it’s the rookie’s on field performance that continues to turn heads throughout the NFL.

His name is Ryan Wright and he’s the rookie punter for the Minnesota Vikings that apparently won the preseason “punt-off” with the incumbent Jordan Berry before the official “punt-off” even occurred in the team’s preseason finale. Berry was cut before the match and the job was given to the rookie without a whole lot publicly to be seen.

It turns out that he’s pretty good!

On Sunday in Miami, Wright punted the ball 10 times. That’s not a particularly impressive stat for the team as it highlights some of the offensive deficiencies but when you look a little closer and see that Wright dropped a team record SIX of his ten punts inside the 20 yard line including the BOOMING 73-yard behemoth that he started the game with, you start to see why people are singing his praises.

That punt, went about 80 yards in the air and finished with a net distance of 75-yards, the longest net distance in the NFL this season. To date, Wright leads the league with 15 punts inside the 20 (6 in one game will do that for you) but his value is only starting to be felt.

“The kid is absolutely killing it right now,” Vikings color analyst Pete Bercich shared on KFAN 100.3 FM Monday morning. “The special teams group as a whole is keeping us in games, flipping the field but what a grab, what a find that kid was!”

Just as impressive, Wright is one of only 6 punters in the entire league who has yet to record a touchback in a game.

Better yet, as such a dynamic weapon in the punting game, he also proved as a former quarterback that he can still chuck the pigskin completing a pass a few weeks back in London on a fake punt that kept the Vikings offense rolling versus the Saints.

At a point in time when the team’s offense and defense are still struggling to find consistency on a week-to-week basis, having a solid base on special teams is proving to be of the utmost importance and coach would agree. Wright’s performance Sunday afternoon in Miami earned him a game ball from coach Kevin O’Connell along with the entirety of the Vikings defense who stepped up big!

Let’s state the obvious. None of us hope that the punter continues to be the Most Valuable Player for the Vikings the rest of the way, but having that arrow in your quiver is never a bad thing to fall back on when push comes to shove.