The Minnesota Vikings begin their joint practices with the San Francisco 49ers today. These practices culminate in a preseason matchup that will take place on Saturday, August 20th at 6 PM Central. As the two teams begin competing with and against each other for the rest of the week, here are a few things to keep an eye out for in the 49ers/Vikings matchup.

Can the Tackles Keep up with Nick Bosa?

The Minnesota Vikings have a pair of offensive tackles with All-Pro potential in Christian Darrisaw and Brian O’Neill. They’ve already proven that they can hang with some of the best EDGE rushers in the NFL by competing with Danielle Hunter and Za’Darius Smith on a daily basis. Then this past Sunday they played very well in the eight snaps that they got in Minnesota’s first preseason game against the Raiders.

Now, Darrisaw and O’Neill get a look at Nick Bosa, who is coming off a 15.5 sack season in 2021. Considering that the Raiders didn’t start their top-tier defenders last Sunday, this is the first real chance that we get to see the duo take on an actual opponent rather than teammates.

Bosa didn’t play in San Francisco’s first preseason game, and there’s a chance he won’t play on Saturday, but these practices should provide terrific matchups for the Vikings offensive line to challenge themselves.

On a few occasions last weekend, the Vikings defense overran their pursuits to the quarterback, allowing easy yards to be gained on scrambles. One of these resulted in a Jarrett Stidham rushing touchdown where he walked into the endzone untouched.

This week, Minnesota gets to see another very mobile QB in Trey Lance, and one of the challenges they will face is containing him from hurting them with his legs. However, it’s not as if Lance doesn’t have a terrific throwing arm on top of that mobility. The Green Bay Packers found that out the hard way last week when Lance and WR Danny Gray torched them for a 76-yard touchdown.

Lance will provide a very unique challenge for both Minnesota’s defensive front and their secondary. Again, we will probably get a very limited look at the second year QB in the actual game, but the Vikings will grow very familiar with him in practices.

The San Francisco 49ers are one of the few teams in the NFL whose wide receiver duo is on the same level, if not a slightly higher one, than the Minnesota Vikings. The Vikings secondary has been tested daily by Justin Jefferson and Adam Thielen, but Deebo Samuel and Brandon Aiyuk provide an altogether entirely different challenge.

While guys like Andrew Booth and Lewis Cine got their first taste of NFL action last week, they didn’t have to play against the Raiders top receivers. This week, they will get the full taste of what one of the NFL’s best all-around players looks like in Deebo Samuel. If they match up well with this receiving group, that is a terrific sign moving closer to the regular season.

One of the most unique factors for each of these teams is the fact that they not only carry fullbacks on their roster, but they utilize them regularly in the offense. Kyle Juszczyk and CJ Ham are two of the only players truly keeping the fullback position alive in the NFL, and now we get to see them on the same field for multiple days in a row. 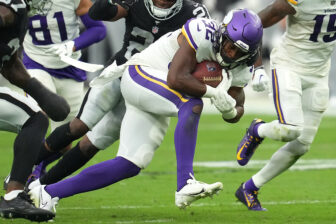