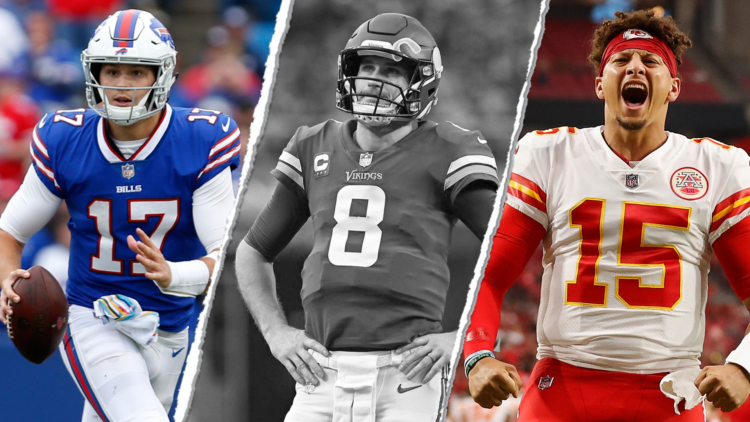 Wow, how about that football game?!

I struggle to come up with the proper words to describe that Sunday Night’s Bills @ Chiefs game. There’s really no descriptive phrases to accurately portray 25 points in the final 120 seconds of the game, four touchdowns for one player, fireworks left and right, and an overtime winner for the Chiefs on a spinning catch by Travis Kelce.

I don’t say this to rub anybody’s face in the dirt, but that game was unlike anything that we saw from the Minnesota Vikings in 2021. There are years of build up that go into both the Bills and the Chiefs success, but man isn’t that a perfect example of why the quarterback matters.

That ladies and gentlemen shows you what you should expect when you spend $40+ million on a quarterback…sadly, Kirk Cousins doesn’t fit that mold.

Since, as Vikings fans we have already turned our attention to the next season, we can now practice the age old Minnesota tradition of a bunch of rubes sitting in their La-Z-Boys balancing the salary cap. And in the year 2022, the fist thing you note when crunching the numbers is that Kirk Cousins is about to hit us square between the eyes with a $45 million cap hit.

This seems like a good place to interject as I feel really negative so far with all of these disparaging remarks directed squarely at the quarterback, but it’s really not his fault. Kirk said yes to the deal that was offered, and then agreed to kick the can further down the road and sign the extension that the team offered. At the time of the deal, he was the top-quarterback on the market and the Vikings were the most desperate team that thought they were a quarterback away. That’s what the market was demanding and the Vikings opted to hang their hopes on the possibility that Cousins was ready to take that next step forward with the Minnesota Vikings.

Hindsight now being 20/20, we can see the error in these ways.

It’s a tale as old as time…Kirk puts up the big numbers but doesn’t seem to have that “it” factor. We’re still not fully able to quantify what the “it” factor is, but man “it” was on full display last night with both Allen and Mahomes.

It’s okay to spend 20% of your cap-space on one player, specifically a quarterback when those quarterbacks play the way that Patrick Mahomes and Josh Allen played last night. Neither of those quarterbacks are perfect, in fact both of them had lulls this season that led their teams to losses. But they did enough to keep their teams in most games and then started trending upwards towards the playoffs where they were both playing their best football on Sunday Night in the Divisional Round. It included the clutch gene, it included acrobatic plays, it included gutty runs with their feet that show they’re willing to put it ALL on the line, it included a contagious confidence that told teammates they simply weren’t willing to roll over and quit. Those are things I just don’t think we see from Kirk.

Ask any Chiefs fan if Mahomes is worth the fully guaranteed $45 million/year he’s slated to make over the next ten years and you won’t get one argument. Same for Allen who locked in at $43 million/year for the next seven seasons. Cousins just doesn’t fit that mold.

To be fair, Kirk is only locked up for one more season, but for an organization that is on the cusp of making a handful of big decisions that will shape the future of the organization, this should probably be an argument against the idea of extending Kirk at this price tag. We all explored what the possibility would look like, admittedly I did it too, but we need to stop. We need to come to the realization that Kirk Cousins is not a $40+ million quarterback and continuing to operate as if he is will only be a detriment to the team in the future.

If Cousins truly wants to stay in Minnesota, as he claimed in his season closing press conference, if he really wants to compete and go far in the playoffs, maybe even win Super Bowls, Kirk needs to come to this realization as well. He simply cannot demand a $40+ million contract going forward, from any team.

For fans of an organization that has spent too much time trying to get the quarterback position right, letting Cousins walk after the 2022 season is a scary proposition. Say what you will about the Minnesota Vikings futility when it comes to playoffs and Super Bowls, we’re not used to the idea of a top-to-bottom reboot. That doesn’t mean it’s not the right play. Many other position groups have been forced into that young reset heading into next season, the quarterback position might just be one year behind.

As the Vikings prepare to bring in new leadership at the General Manager and Head Coaching positions, the hope is that they bring with them a different blue-print to building success here in Minnesota. If the rumors of their interest in Ryan Poles from Kansas City are true, maybe that blue-print will include not settling at the quarterback position.