The GM’s View: Reactions from a Much Needed Win in L.A. 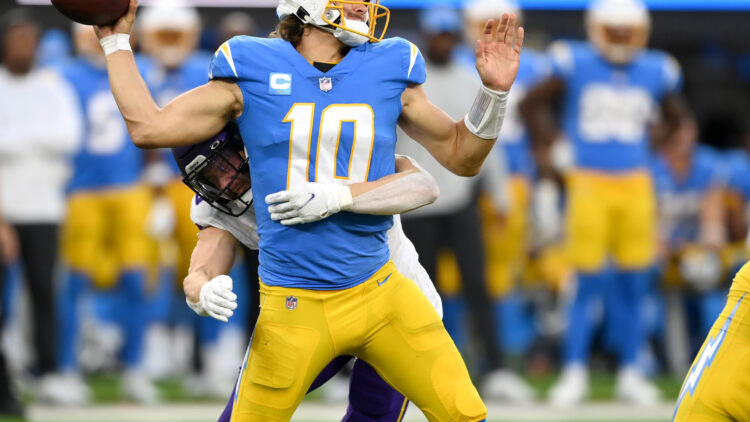 In the words of the game’s defensive star, Vikings linebacker Eric Kendricks, it was “a much needed win.” I’d add potentially season-saving to the description.

The Vikings played with guts, determination, and desperation. Watching Mike Zimmer do the SKOL sign towards Minnesota fans in attendance at SoFi Stadium after the 27-20 much needed win over the Chargers, the importance of this victory in the coach’s mind was very apparent.

Zimmer knows at 4-5 the Vikings are back in the playoff chase with eight games to go (one-half game behind Carolina for the last NFC playoff spot and the Vikings beat the Panthers thus holding a head-to-head tie-breaker and only one game behind the Saints for the No. 6 spot).

It was an impressive performance on offense, defense, and special teams against the then AFC West-leading Chargers, who came into the game with a top 10 offense and aggressive defense. Minnesota’s defense held L.A. to 253 total yards despite missing five starters.

The Vikings offense came through with a clutch 61-yard drive to run out the clock and overcame excessive penalties in the game and on that drive by rediscovering their intermediate passing game. They played aggressively with Kirk Cousins converting big plays to his star receivers, Justin Jefferson and Adam Thielen, while Dalvin Cook was effective in the run game. And the special teams contributed to this much needed win with Dede Westbrook’s best game as a Viking punt returner. Plus, Greg Joseph making all five of his kicks.

This should inject confidence in a Vikings team headed into a home battle next Sunday with division-leading Green Bay, who is 8-2 after shutting out Seattle 17-0.

Here are my other quick hit reactions to the kind of performance the Vikings will need down the stretch:

1.Jefferson had a superstar day — nine receptions for 143 yards and his biggest catch was a 27-yarder on 3rd and 6 with three minutes left on a perfect back shoulder sideline throw from Cousins that set the Vikings up to run out the clock. Jefferson had several other key third-down receptions in the game, and I loved the toughness he showed by dragging defenders on a 21-yard second quarter catch-and-run to set up the first Minnesota touchdown.

But I really don’t like Jefferson coming off the field for 19 plays (as he did in L.A.) when the Vikings go to their run-oriented package. I’m sure defensive coordinators love to see him on the sideline and it seems that defenses would be less apt to stack the box if both Jefferson and Thielen are in the game.

The other half of the Vikings dynamic wide receiver duo — Thielen — also made several big catches including an 18 yarder on 3rd-and-20 to set up Cook’s game-icing first-down run.

2. Cousins played well overall, overcoming a first-quarter lost fumble and making many throws under pressure from a good Chargers pass rush led by All-Pro Joey Bosa. One of his best plays was the touchdown pass to tight end Tyler Conklin on 4th-and-Goal from 1-yard line (with Chargers in his face) to put Minnesota up 20-17.

Credit Cousins for doing what he should have done in the Dallas and Baltimore losses, which was giving his terrific receivers opportunities to make contested catches. He must continue to play this way even if it leads to an occasional interception.

3. Credit Zimmer for pushing much-criticized offensive coordinator Klint Kubiak to be aggressive in the passing game while balancing with strong running from Cook and Alexander Mattison. It was wonderful to see fewer checkdowns.

Zimmer also made the gutsy call to go for the win on the 4th-and-2 run by Cook when he could’ve gone with a 53-yard field goal attempt. He did not want to give the ball back to Chargers quarterback Justin Herbert, who’s led several comebacks in his young career.

I also thought Zimmer’s blitz package was a key to disrupting Herbert’s rhythm and confidence as he was held to a season-low 195 yards passing.

4. The Vikings were better on third and fourth downs on both sides of the ball 7 of 16 including 2 of 2 on fourth down on offense and holding the Chargers to 42% on third-down conversions after allowing 50% the past two games.

5. Kendricks flashed his Pro Bowl form with an outstanding game-changing interception that Zimmer called “big time” along with a sack and nine tackles. Zimmer praised the play of his cornerbacks who faced excellent receivers in Keenan Allen and Mike Williams and kept them out of the end zone.

Bashaud Breeland still looks shaky to me, but he had a big third-down stop to hold the Chargers to a field goal late in the game. Hopefully, Patrick Peterson is back off injured reserve to face Aaron Rodgers and Davante Adams and then Zimmer can rotate Breeland and Cam Dantzler at the other outside corner spot and go with whoever is playing better.

6. The offensive line must keep their hands in check to avoid these holding penalties that have been prevalent all season. The Vikings needed several big plays from Jefferson, Thielen, and Cook to overcome the penalties and secure the much needed win. The 15-yard facemask call on blocking tight end Luke Stocker that almost was a killer on the final drive is a ridiculous foul to be committed by an 11-year vet at a critical time of the game. Perhaps Ben Ellefson can return soon from injured reserve to reclaim this role.

7. Kudos to rookie safety Cam Bynum who has filled in well for Harrison Smith (absent the past two games due to Covid). Bynum had a key sack to stop a third-quarter Chargers drive when L.A. led 17-13. He added six tackles and continued to show his speed and playmaking ability. I see a future starter in Bynum who will be less expensive against the cap next year compared to Xavier Woods who is on a one-year deal.

8. Conklin is proving to be an excellent goal-line target for Cousins, just as Kyle Rudolph was in the past. In his first two TD game, both catches were difficult.

9. Mattison can start for probably half the teams in the league and is one of the top No. 2 backs. He broke four tackles on his terrific 24-yard catch and run that helped set up Joseph’s second quarter field goal from 46 yards.

10. Here’s an interesting stat that flashed on the telecast — the Vikings are the only NFL team to lead by seven or more points in every game this season. Thus, they need to do a better job of holding leads as they did against the Chargers in this much needed win.