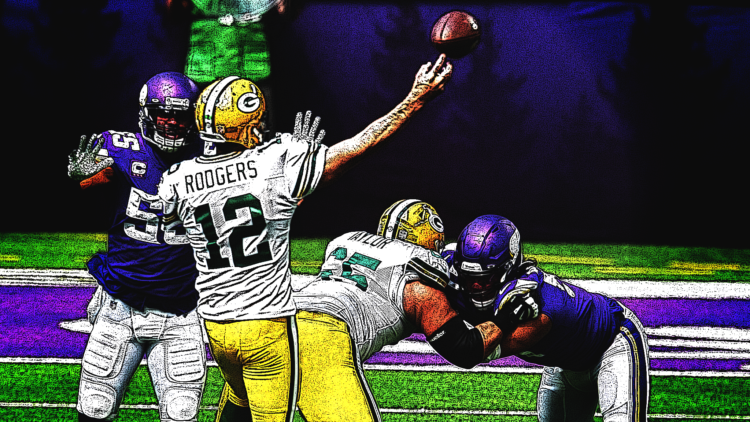 It took two months, but the Minnesota Vikings schedule now becomes all too familiar. And that can be good or bad depending on your interpretation.

If you’re down and confused,
And you don’t remember who you’re talking to,
Concentration slips away,
Cause your baby is so far away.

Those words were sung by Stephen Stills 51 years ago this month, and they might just apply to Vikings fans’ feelings about the slate of opponents to date.

Minnesota has taken on seven teams through nine games of the 2021 NFL season that are currently embroiled in playoff contention. The two outliers were the Detroit Lions and Seattle Seahawks. The Vikings schedule has been tricky, and Mike Zimmer’s squad is 4-5 to show for it.

Well, that all changes now. 63% of the Vikings remaining schedule is composed of NFC North teams – two games against the Green Bay Packers, two games versus the Chicago Bears, and a rubbermatch in Detroit on December 5.

Green Bay crosses the Mississippi on Sunday for a date with the Vikings, holding a commanding lead on the NFC North division. Minnesota marinates in second place through 10 weeks, trailing the Packers in the division by 3.5 games. It is unlikely Minnesota catches Green Bay for a division title, but a win or two against the cheesy foes would enhance their probability for punching a wildcard ticket. The Packers are favored by 2.5 points over the Vikings this Sunday.

After that, the Vikings travel westward – again – to battle the maligned San Francisco 49ers. Head coach Kyle Shanahan has a pristine national reputation, but the Shanahan version of the 49ers has done virtually nothing outside of a 2019 Super Bowl appearance. Minnesota infamously plays poorly in San Francisco – no wins there since 2007 – so that matchup will be difficult no matter what. Following the 49ers tryst, the Vikings travel to Detroit, perhaps for a reprieve on the schedule before hosting the Pittsburgh Steelers – a weird team that is good some weeks and terrible in others.

Then, the final four games are at Chicago, home against the mighty Los Angeles Rams, at Packers, at home again versus Chicago.

Those teams aren’t necessarily easy or beatable, but they are familiar to the Vikings. The simple pathway to the playoffs for Minnesota? Take care of business within the NFC North, and a postseason trip should be the reward.

Vikings games against the Packers and Bears are never smooth – especially at Soldier Field – but the familiar schedule can be an asset if the team is in the mood for it. To date, the Vikings insist on partaking in down-to-the-wire games with non-NFC-North opponents. Evidenced by a 4-5 record, that hodgepodge of games and opponents hasn’t been fruitful.

Per current wins and losses, the Vikings have the ninth-toughest remaining schedule in the NFL. If they reach the postseason, they will have assuredly earned it.