The GM’s Keys to Vikings beating the 49ers 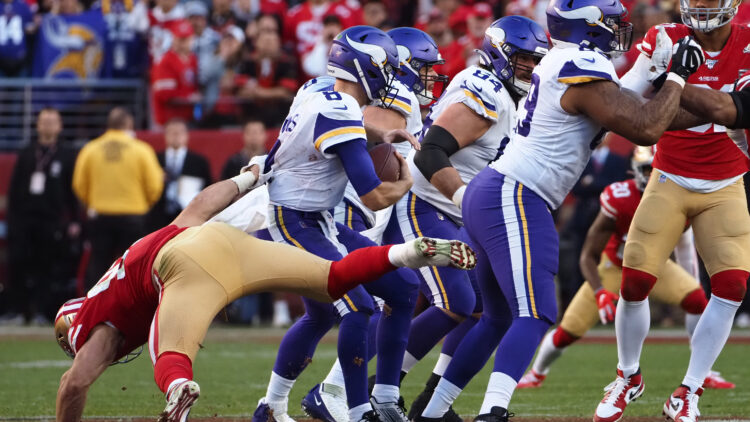 The big game tested Vikings face another one Sunday when they travel to San Francisco seeking a victory that would give them a tie-breaker edge over the 49ers in the NFC wild card race.

Minnesota also is trying to get over .500 for the first time this season and stay in the NFC North title chase following their win over the Packers who could face a challenge from the Rams on Sunday. The Vikings are solidly in the playoff hunt, currently holding the second wild card spot but playoff positioning changes quickly in the second half of the season, depending on each week’s results.

Like the Vikings, the 49ers are 5-5 and looking for their third straight win. They are not as overpowering on either side of the ball as the top seeded team that dominated the Vikings in the 2019 NFC Divisional playoff loss when they held the ball for 38 minutes and rushed for 186 yards while holding Dalvin Cook to 18 yards on the ground and sacking Kirk Cousins six times.

Here are my keys to the Vikings beating the 49ers:
1. Don’t listen to your conservative instincts and stay aggressive, Kirk: after the Packers game, Cousins talked of several throws that were “too aggressive,” saying “You don’t want to live in a world throwing the ball into a coverage and crossing your fingers. There’s a time and place for it and I also want to be a smart football player.”

Zimmer pushed back and said he wants Cousins to continue throwing downfield. “If it’s intercepted, that’s life in the NFL,” said Zimmer in giving Cousins the green light to stay aggressive after two straight wins with that approach.

It will be interesting to see if the Vikings look at the 49ers’ No. 3 pass defense and No. 20 run defense and decide to overemphasize the running game. That could be a mistake as the formula is pretty obvious and worked well against Green Bay’s top five pass defense: target Justin Jefferson at least 10 times and give he and Adam Thielen opportunities to make big plays while still giving Cook his 20 plus touches rushing and receiving and sprinkling in chain-moving throws to Cook, Tyler Conklin and K.J. Osborn.

The running game still must be effective to set up play action throws downfield and the screen game can be effective against an aggressive 49ers pass rush.

2. Control Nick Bosa–Two weeks ago against the Chargers it was Brian O’Neill for the most part matching up with mixed results against the older Bosa brother, Joey. This week it’s rookie Christian Darrisaw who has most critical matchup up front with the task of trying to block younger brother Nick Bosa who leads the 49ers with 10 sacks. Darrisaw will likely get help from Conklin C.J. Ham in an effort to give Cousins time to make intermediate and deeper throws.

The 49ers front four is effective with Bosa outside and Arik Armstead a force inside but overall the D-line is not as formidable as two years ago with DeForest Buckner now in Indianapolis and Dee Ford battling a back injury (we’ll see if he comes off injured reserve this week). I thought Ezra Cleveland played one of his best games at left guard last week and we’ll see if Mason Cole continues to start at center in place of Garrett Bradbury.

3. Win the turnover battle: the Vikings are +6 and have the fewest giveaways (6) in the league while the 49ers are -5 but most of their giveaways occurred during their 2-4 start.

4. On both sides of the ball, continue last week’s avoidance of penalties: only three flags on the Vikings, none on offense, was a pleasant change. The Vikings O-line must not draw holding calls that would put Cousins in long yardage situations. The lack of offensive penalties played a big part in Minnesota’ third down success against the Packers (9 of 13).

5. The Vikings defense is very familiar with the 49ers offensive scheme under Coach Kyle Shanahan since it’s a mirror image of Minnesota’s offense with the emphasis on outside zone runs and boots by Garoppolo off play action. The Vikings’ defensive ends must avoid getting sucked inside by the play action/boots and the Vikings need another big game from Eric Kendricks who loves to play in California and was the defensive star in the win over the Chargers.

Garoppolo threw only 41 passes over the past two games so the 49ers clearly emphasize the running game. The Vikings were better against the run vs. Green Bay. Vikings defensive tackle Armon Watts, who has played well in place of the injured Michael Pierce said, “Our number one goal every week is to stop the run and try to make a team one dimensional. Andre Patterson (co-defensive coordinator) hammers us on stopping the run and I think we’re going in the right direction.”

This will be a big test for the run D and Minnesota’s defense also must continue to find ways to pressure the QB as they did early last week but not in the second half against Aaron Rodgers. Rotating Sheldon Richardson in at left defensive end was effective early and likely will continue this week in passing situations but Richardson is the likely starter at defensive tackle if Dalvin Tomlinson can’t play (he’s currently on the Covid list).

Deebo Samuel is the biggest playmaker Minnesota must contain (No. 2 in the NFL with 994 receiving yards and he has scored eight touchdowns, five receiving and three rushing). Tight end George Kittle is a red zone threat with TD receptions in three straight games and he must be contained by Harrison Smith, Eric Kendricks and Anthony Barr and all three of those defenders will be key in stopping the run.

6. A big kick return by Kene Nwangwu or Dede Westbrook also can help the Vikings cause along with Greg Joseph continuing to make clutch kicks as he did with the game-winning field goal last week.

Jeff’s Prediction: I’m going to be an optimist this Thanksgiving weekend and predict another close Vikings win. The 49ers are 1-4 at home this season so that could bode well for Minnesota after having some road success with tough wins at Carolina and the L.A. Chargers. Cousins has thrown 12 TD passes with no interceptions in five road games this season. I’ll call it 27-24 Vikings.

Around the NFL Observations:
1. It’s one of the wildest NFL seasons I’ve ever seen with upsets galore. The top seeded teams in each conference—the Packers and Titans– both lost last week with Tennessee falling at home to a one-win Houston team. No Derrick Henry is catching up with the Titans who released the unproductive Adrian Peterson this week prior to a big game in New England.

The Patriots are the league’s hottest team with five straight wins while the Chiefs are rolling with four in a row and the Colts have won three straight behind NFL leading rusher Jonathan Taylor but have a difficult matchup with the Bucs this week in Indy.

2. Can the Rams rekindle their early season success after two straight losses (to Tennessee and San Francisco) and upset the Packers at Lambeau Field? I doubt it but perhaps coming off their bye, Aaron Donald and the Rams defense can take advantage of Green Bay’s injury depleted offensive line while QB Matthew Stafford follows the Vikings blueprint and airs it out with success. The Vikings certainly hope that’s the case along with a win for them in the Bay Area.

Also Read: Does this dubious stat mean the Vikings are Good or Bad?