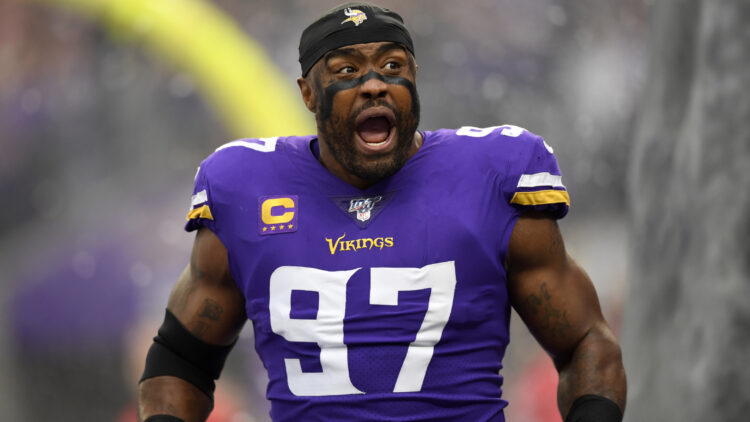 MINNEAPOLIS, MINNESOTA - SEPTEMBER 08: Defensive end Everson Griffen #97 of the Minnesota Vikings takes the field against the Atlanta Falcons in the game at U.S. Bank Stadium on September 08, 2019 in Minneapolis, Minnesota. (Photo by Hannah Foslien/Getty Images)

Rumors of a fairytale return to Minnesota gained steam last week when four time pro-bowler Everson Griffen traveled to Minnesota for a workout with the Vikings.

As of today, and according to the team, Griffen and the Vikings have agreed to deal and his return to the purple is official.

The #Vikings have signed DE @EversonGriffen!

But what’s the plan for Everson?

Danielle Hunter has the right defensive end spot locked up and the team appears to have moved on to others at the left end position…why bring Everson back at this late stage in his career?

Well, two former Minnesota Vikings linebackers think they might have an idea for what Zimmer and Andre Patterson still see as a good role for Griffen in this Minnesota defensive front.

Last Thursday, Ben Leber and Chad Greenway joined the Power Trip Morning Show on KFAN to discuss the rumors and workout of Everson Griffen with the Vikings. They seem to think that bringing him back would come along with a bit of a position change as well.

“I could see him moving inside,” Greenway explained. “Three-technique and rushing inside. He’s just gonna offer some versatility.”

“What Everson’s really good at is being explosive off the ball, [he’s got] an unbelievable first step, “Greenway continued. “He offers them a lot of flexibility on third down in that pressure package. If he can still get that explosiveness, he’s one of the most powerful, strongest dudes I’ve ever been around.”

Remember back at the end of the 2019 season, Zimmer experimented with and confused the Saints with Everson Griffen and Danielle Hunter rushing out of the inside of the line, so there’s some history here.

According to Leber, he could see Griffen playing the utility role spelling players on the outside and inside and being a third down specialist.

Both players assume that Everson will sign for close to a veteran’s minimum bringing the risk of his return close to zero.

“I think he wants to put a cap on, ‘hey I started here, I’m coming back around to finish here.’,” Greenway said. “He’s gonna harass the quarterback and Zimmer knows how to use him!”