Crazy Internet rumor of the day, Julio Jones to the Vikings??? Don’t hold your breath… 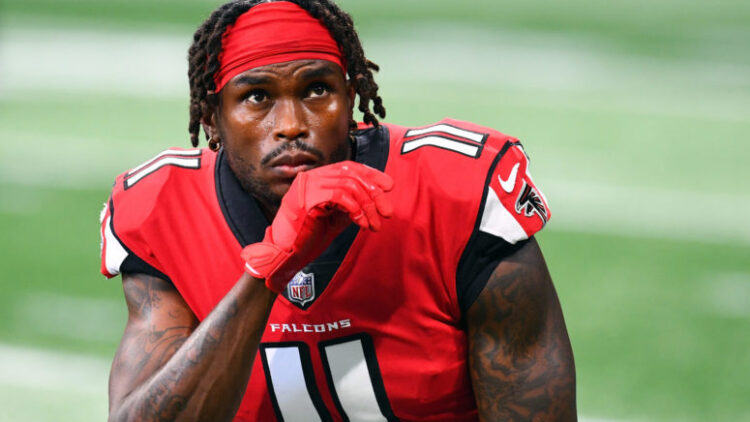 Among the pantheon of crazier Internet rumors their lies a “Mount Rushmore” or sorts. Honored on this digital monument will forever be the lasting images of Manti Te’o’s girlfriend, the Nigerian Prince who left you his inheritance, a dead Big Foot in a cooler and then the fourth space is left open. It’s void is intentional as it represents the wild flavor of the day type of hoaxes and rumors that get thrown out on a regular basis.

Today, one such rumor hit the fan in a minor way here in Minnesota.

As best I can tell, it’s sourced from a Minnesota Sports fan named “Kevin”. There’s not much more to it than that. But when you start getting people reaching out on Twitter asking about the possibility of it being true, you know that it’s starting to swirl among the fanbase.

“BREAKING: Sources close to me are telling me the Vikings have had some serious talks with Julio Jones agent and are finalizing trade talks with Atlanta to send him to Minnesota. More coming soon.”

Like I said, not a whole lot there. He followed it up with another post a few hours later claiming that the deal had progressed a bit and could come to fruition later tonight or tomorrow morning.

Twitter grabbed hold of it though and it started popping up in my feed, then random Facebook friends started posting things like “JULIO JONES” in all caps and boom…there you have your Internet rumor of the day. This seems like someone putting 2 and 2 together without any real sourcing. Julio needs a team, the Falcons are considering trading him, the Vikings need a WR3 and voila, Jones is going to be a Viking.

Before you join in on the hype and start going crazy, this isn’t going to happen and we should all just calm down. Here are just a few reasons why this match made in a fantasy football heaven just isn’t going to come to fruition.

First, and likely the most important end of the story was pointed out by my colleague at KFAN Paul Charchian. Charch reminded us on social media that the Vikings remain cap-strapped heading into the 2021 season. Cap Guru Rob Brzezinski worked his magic to make a couple free agent acquisitions and field a roster, but sitting with just $7 million in cap space today, the Vikings are likely putting all of that remaining towards their draft class of 11 players they hope will contribute.

Right now with Atlanta Jones’ base salary is $15.3 million. He’s not the same player that he once was, but he’s also not going to play for a veteran’s minimum around $1 million which is all the Vikings could even hope to afford.

Additionally, Julio is 32-years old, he’s had injuries and he doesn’t appear to be willing to take a back seat to the likes of Adam Thielen and Justin Jefferson on a route tree. The Vikings entered the draft looking for a wide receiver to compliment Thielen and Jefferson, not overshadow them.

But again, the price tag doesn’t even come close to lining up so why are we even humoring this idea?

At the end of the day, the Vikings would need to part with a highly paid starter or two to get the salary to work, they’d likely need to throw in some draft picks and in doing so would jeopardize the future more than is needed. I wouldn’t say that this team is a star wide receiver away from the Super Bowl right now.

All of this said, if it happens I’ll be the first to paste “Jones” over the back of my old Laquon Treadwell jerseys and holler all ‘the way to U.S. Bank Stadium…but it’s not happening.