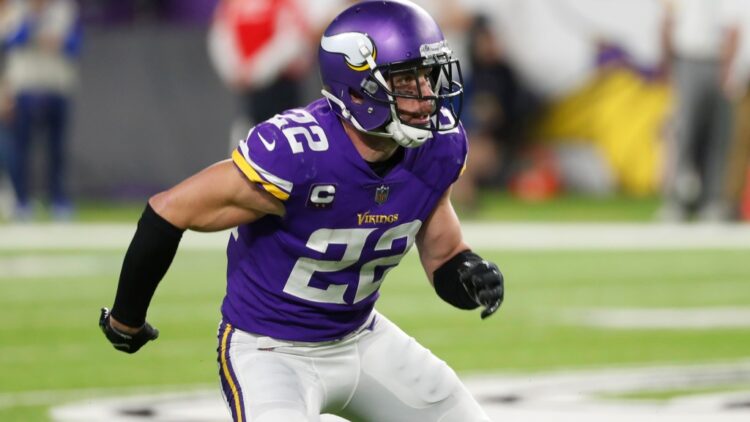 Since the Minnesota Vikings traded back into the 1st Round in 2012 to select Harrison Smith, he has been one of the best safeties in the league.

This past offseason, they decided to extend their playmaking safety worth four years and $64 million. It made plenty of sense given he is now in his 10th season with the team and has always been one of their best players.

What is the issue though?

He is no longer the same player he once was and is 32 years old now. The Vikings could very possibly be headed for a rebuild after this season. With Smith out due to being placed on the Covid-19 list the past two games, he was replaced by rookie Camryn Bynum. The 4th Rounder certainly has looked very good. Does this mean he will become a good safety in this league? Absolutely not. But so far, he is off to a nice start.

The good news is the Vikings could still move on from Smith after this year, but they would have saved more by not extending him and let his contract play out after this year. It is hard to imagine they will, though. He still is a very good player, but once again, he is not the same anymore.

Xavier Woods is only 26 and having a very good season. He is a free agent next year and will be very expensive. Hard to see him coming back. If Smith was not re-signed, it would have increased Woods’ chances of re-signing. Maybe the Vikings would have still let Woods move, however, and re-signed Smith at a cheaper price.

Smith’s extension starts next year. They would save close to $6 million if they move on. After that, though, they save much more. Hard to criticize Rick Spielman for this move. Smith has done so much for this franchise and is one of the team’s best defensive players in their history. Even though it has only been two games also, nobody expected Bynum to jump in and perform the way he has.

Nobody also expected this team to struggle as much as they have. Before the season started this looked like a team that could perhaps make a deep run. Right now, it is not looking like that will happen. They very well could still make the playoffs, but this does not look like a team that will go far.

In hindsight, the decision to extend him is not looking good.