The media invite to Vikings OTAs doesn’t open the doors until Wednesday, but that doesn’t mean the sports reporters won’t do what they can to dig up scoops playing with what they’ve got.

That’s exactly what we saw yesterday when an observant reporter hit the pause button in Zapruder fashion on a highlight video released by the team Tuesday afternoon. I mean, part of it was pretty obvious, but after that we’re talking frame-by-frame dissection and stitching together multiple cuts…at this point in the season, it’s actually quite impressive to be in mid-season form.

Props to Chris Tomasson from the Pioneer Press who’s the one raising the flag on Twitter for this one.

We knew that the Minnesota Vikings offensive line was going to be revamped to some extent, but we weren’t sure exactly how it would look. Well, for OTA session #2 it looked a little different than we might have thought.

First things first, here’s the only video we have to use as a source.

Look in the background at :24 add that together with a snippet at :50, we can see Christian Darrisaw (#71) on the sidelines at the :27 mark and then use your powers of deduction to note that Brian O’Neill is your starter at RG and BOOM…here’s your early OTAs Vikings offensive line.

*Sidenote – If you haven’t watched the BBC version of “Sherlock” stop reading this article now and check back in a few days, you won’t regret it!

Continuing the observations,, it looks like rookie offensive lineman Christian Darrisaw and Wyatt Davis won’t be handed anything out of the gates. Now it’s SUPER early in the process and rookies are certainly still learning the system and observing, but when your first round pick who’s thought to be your day one starter at LT and another who is expected to fight for a guard spot are not out there, apparently it raises awareness.

Here’s the other strange thing about what was observed. Ezra Cleveland and Dakota Dozier have flipped sides. Is this just an experiment? Should we read into this at all? Who knows, but Cleveland made the switch from LT to RG last year, and now he’s back on the left side. Dakota Dozier is a bit more of a swing guy who will likely not factor into the day one equation, but still.

It’s only day one, none of this really matters at this point. Additionally, we have no idea about anybody’s health, anybody’s readiness to take the field and anybody’s familiarity with the system, but still some interesting observations made from Chris “Zapruder” Tomasson. 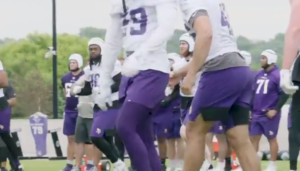 #71 Christian Darrisaw in the background… 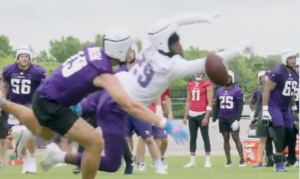 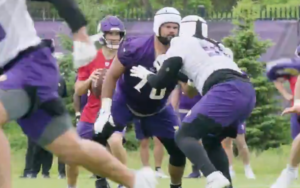