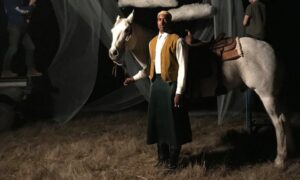 There seems to be some sort of invisible link between athletes that want to be musicians, and musicians that want to be athletes. Many times, it’s something as simple as physical size or skill that keeps one from the other. At 5’3” Prince Rogers Nelson wasn’t going to be an NBA player no matter his love for basketball. That’s why, when someone bridges that gap, even semi-successfully it’s a pretty impressive feat.

Now, to be clear, I’m not talking about all the bad rap songs that we’ve heard come out of the sports world. Remember when Shaq released an album? Or how about this banger from Le’Veon Bell? Not even the best producers in the game could have pushed “Shaq Diesel’s” musical career to the top of the charts.

Rather, it’s an unusual sight to see someone walk away from their sport and actually launch a full blown musical career.

Drafted in 2014 by the Minnesota Vikings, Exum enjoyed a cup of coffee with the purple during his acclimation into the NFL. He appeared in 26 games over two seasons, mostly with special teams but did start 2 games his sophomore season before signing a trio of one year deals with the San Francisco 49ers carrying him through the 2019 season.

All the while, “Exum” his musical alias, was ingesting music and exploring a passion for something off the field. That led him to freestyle rap battles in the meeting rooms first with the Minnesota Vikings then more regularly with the 49ers organization. After being waived by San Francisco in early 2020, Exum saw the writing on the wall and moved his attention to what could only be called a fledgling hobby at the time in the music game.

But it’s what happened next that really tipped the scale to launch his post football career in music.

On July 10th, 2020, Exum laid down on the operating table to undergo surgery for a routine heart procedure. That sounds a bit funny, but as far as heart procedures can go he says that this one left him with little worry heading in. Part way through the procedure, Antone flat-lined…his heart stopped…effectively, he died on the operating table. The complications that led to the heart failure are not public, but the doctors were able to revive Exum and get his heart back in rhythm.

“When I woke up,” Exum told Dazed Digital, “I knew I was doing the right thing. I knew we were making good music…I wanted to immerse myself in the things I loved.”

This new found vigor for his art pushed him over the past ten months to hit the ground running. Fast forward to today and Exum has turned his new lease on life into a debut album called “Xardinal Coffee” which is being released tomorrow, June 4th, 2021.

I sat for a while struggling to find a good way to describe his jams. There are Prince tones to it, I can hear The Weeknd in it. But the music itself may be best described the way that On The Come Up put it, as a “tasteful amalgamation of bizarreness & surrealism”…and that’s just the sort of thing that might work well in 2021.

Vant calls him “The Dennis Rodman of football”, I’ll add to that to say that if Dennis Rodman and Lady Gaga had a child, Exum would be it. A quick look at the music video for “Dark Kept Secret” will showcase where these comparisons come from.

Listen to him talk about his work and you’ll further see how well the comparison seems to fit.

“[After my experience] I feel like I went from listening to music to like, now I feel like I am music. I have to become whatever I do, I try to become it, so that it moves through me.” – Exum with Dazed.

Exum’s debut album Xardinal Coffee releases Friday, June 4th. Check it out and give it a chance, it may not be for everybody but there’s a place in the musical world for Xardinal Coffee.