Why the Horse Collar Penalty on the Vikings Was Bogus 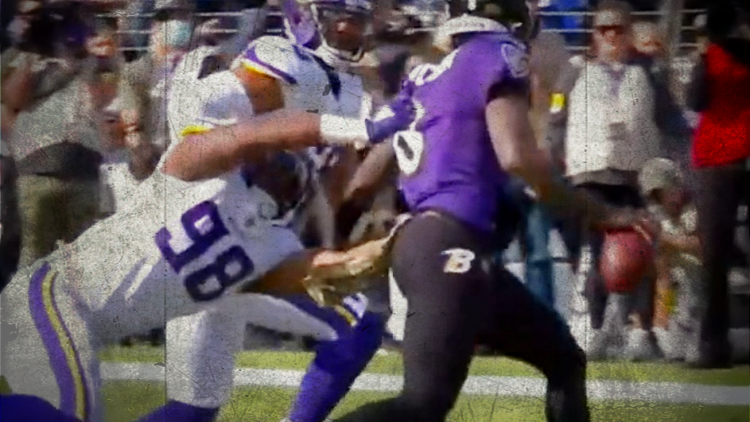 The Minnesota Vikings had a very reasonable chance to thwart the Baltimore Ravens on the road in Week 9 but failed to do it, losing 34-31 to the other purple team. The team was on-brand for its 2021 antics, scoring on the first drive while maintaining palpable hope the game would break in its favor. Then, when it mattered the most, the defense crumbled due to fatigue, derived from an upside-down time-of-possession discrepancy.

Make no mistake, Mike Zimmer’s team deserved to lose – as is the case for all losses this season.

But the tone of the game could’ve been a lot different on the first drive. Instead, a blown call erred on the side of the Ravens, enabling Lamar Jackson and friends to continue a drive.

Second-year EDGE rusher D.J. Wonnum – who is filling in for Danielle Hunter the rest of the way – dragged the 2019 NFL MVP to the ground, and the football squirted away. It was recovered by the Vikings, and a fortunate tone was set by Minnesota.

And then the flag hit the grass.

This so-called infraction changed the course of the first quarter and ultimately the game. Wonnum’s tackle was not an iffy call, nor was it interpretive.

The rule – “No player shall grab the inside collar of the back or the side of the shoulder pads or jersey, or grab the jersey at the name plate or above, and pull the runner toward the ground” – even emboldened in the text, explains the fallacy of Wonnum’s penalty.

Wonnum did not grab “at the name plate or above.” Re-watch the video. Watch it a few times. His grasp is at the numbers, dragging Jackson to the ground. It’s a tackle, not a personal foul.

Had Wonnum snatched Jackson on the jersey where the garment reads J-A-C-K-S-O-N, this would be a 15-yard penalty. Wonnum did not do that. The tackle was clean, and a turnover was forced. Vikings ball.

The problem in recent seasons for controversial calls is how a play looks to the naked eye. If a hit or tackle “looks bad” or “looks violent,” the flag pops out. There is no nuance, and the NFL disallows replays of penalties.

More egregious penalties have been called in 2021 – usually of the roughing-the-pass variety – but this one altered the course of a game at the onset.

Jackson was legally tackled. The fumble was legitimate. Minnesota recovered. The officials had other plans.

This is not debatable.

Also Read: The Mind-Boggling Change of Pace for Zimmer’s Vikings