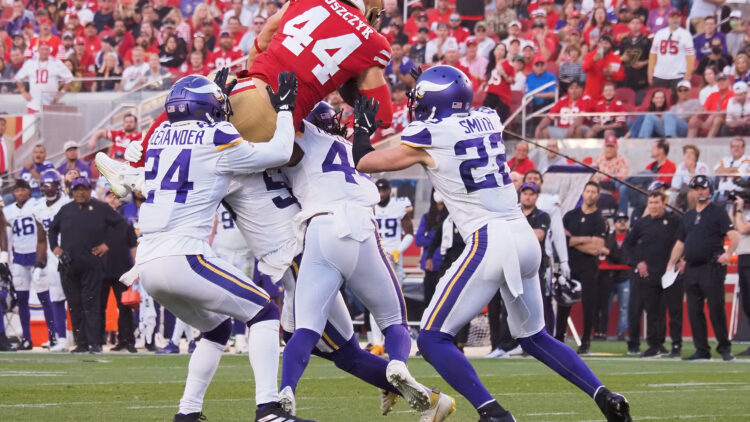 This game hurt. A lot.

A win would have boosted the Vikings’ playoff chances well above 80%. So while Minnesota still sits with around a coin-flip chance of making the playoffs, the 34-26 loss in San Francisco can at best be characterized as a missed opportunity, and at worst, as detrimental to the Vikings’ hopes for accomplishing anything in this 2021 season.

So, why did Minnesota lose to the San Francisco? We all love to play the blame game, so let’s play it. Who deserves the blame for the Vikings’ latest disappointing debacle?

I’ve seen fingers pointed at the defense, at Zimmer (what’s new), and Cousins (of course). So, how should we divvy up our criticism?

Unfortunately for those looking for a simple explanation for Minnesota’s loss at San Francisco, this game was lost because of failures teamwide. There is no easy scapegoat in this one.

Cousins was mediocre, missing multiple easy throws. Plus, he tossed one of the worst interceptions you’ll ever see an NFL QB throw.

The Vikings run game was shaky. The offensive line struggled. The defense was solid — especially given they had to take the field twice with almost no rest after two horrifically bad turnovers by the Minnesota offense inside the 12-yard line — but gave up another touchdown inside the last two minutes of the first Half. And they were gashed in the run game leading to a terribly lopsided time of possession battle.

There weren’t any terrible coaching mistakes to fingerpoint, but some questionable play calls on offense and defense indicate Minnesota’s coaching staff shouldn’t go entirely without blame.

Now, this all sounds depressing and dreary, right? Minnesota didn’t just lose due to a bad bounce or two. The team lost due to failures and ineptitude across the field. Some of the errors that caused this loss are relatively easy to fix, like avoiding turnovers inside your own 15-yard line.

But other issues are substantial. As fans, we tend to blame the coaches because then mentally, it feels like an easy fix. “If our coaches just made the right decisions, we would win every game easily,” and while the coaching was not perfect (it rarely is), this loss falls on the shoulders of Minnesota’s players. They need to perform better for Minnesota to win.

So, where does Minnesota go from here? They still have fairly strong playoff chances, and we’ve seen them beat Super Bowl contenders already this season, so surely they possess teamwide talent.

First and most importantly, Minnesota needs to gain consistency on offense, starting with Kirk Cousins and Klint Kubiak. Cousins needs to be better. He can’t miss throws. Minnesota is not good enough to win without an elite performance from their quarterback, and Cousins was not elite on Sunday.

Kubiak needs not to waste plays, ever. Down eight points in the 4th quarter, the Vikings orchestrated a crucial drive down the field to the 49ers 6-yard line, but then Kubiak called back to back Alexander Mattison runs for a total of tw0 yards gained.

The Vikings ended up turning the ball over on downs after Cousins failed to get Minnesota into the end zone on 3rd or 4th down, and that virtually signaled the end of the game.

Minnesota is not good enough on offense (especially when Cousins isn’t at his best) to waste two plays in a goal-to-go situation and still score touchdowns with any consistency.

Lastly, Zimmer needs to keep the opposing offenses from scoring points in the final minutes of the 1st Half. The Vikings have the worst final two minutes of the first-half defense ever. That isn’t good. And it needs to be fixed ASAP.

This sounds like a lot to fix, but we’ve seen it fixed before. All hope is not lost, but this team is not good enough to make multiple mistakes and still win football games.

Minnesota has the talent to win against anyone, but only if they don’t beat themselves first.