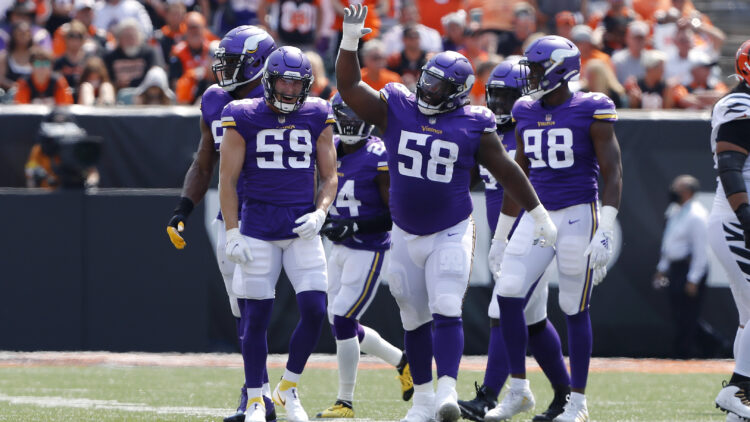 It’s no secret the Minnesota Vikings have a huge problem with run defense, a problem dating back to last season.

Against teams proficient with the run, like the San Francisco 49ers, the Vikings defense gets run all over. A returning Michael Pierce should give the Vikings a boost in this area. The team’s starting nose tackle hasn’t got going in Minnesota, following an opt-out of last season due to COVID. And there was excitement to finally see Pierce this season.

We got four weeks, though it was more like three and a half.

Pierce sustained an elbow injury in practice leading into the Cleveland Browns game. After weeks of appearing to be close to a return, the Vikings eventually placed Pierce on injured reserve. The good news is Pierce returned to practice on Wednesday. With his mandatory 3-week stint on IR finished, returning to the active roster is imminent.

Head coach Mike Zimmer has said he hopes Pierce will play against the Lions on Sunday. A returning Michael Pierce would be a timely boost for a banged-up Vikings defensive line. Dalvin Tomlinson has returned from the Reserve/Covid-19 list for another boost. Although Eric Kendricks, Anthony Barr, and Mackenzie Alexander are all questionable on the final injury report.

The injuries mounting up at this juncture in the season shouldn’t surprise. With Danielle Hunter done for the season with his pectoral injury and no timetable on an Everson Griffen return, a returning Michael Pierce and Dalvin Tomlinson is a welcome sight.

The mass of humanity that is Michael Pierce’s 6,0 and 340 lbs frame is back in the middle will also free up Armon Watts and Sheldon Richardson for more pass-rushing duties, where both have performed well.

Having played so little football over the past two years, Pierce may not return following this injury completely game-ready. The Vikings need him to get there quickly, though. If the Vikings are to make the playoffs and then make some noise once they get there, the team requires serious improvement on defense.

The season did start well for Pierce. In.the games he played, he tallied nine tackles, two tackles for loss, two QB hits, and two sacks.  Pro Football Focus gave him a respectable overall grade of 67.2, with an impressive pash-rush grade of 71.9.

His hard work to become more athletic and a force in the pass-rush side of the game was evidenced in preseason training videos. The work certainly looked to be bearing fruit in the opening games of the season.

His “bread and butter” has always been run defense, carrying the reputation of one of the best run-stuffers in football. His run defense grade from PPF of 63.0 is lower than you’d expect but is from a small sample after coming back from a year away from the game.

I felt that a good run of games would see Michael Pierce start to produce his best football, which is of the caliber of one of the best nose tackles in the league. Unfortunately, we didn’t get to see that.

A matchup against the Detroit Lions would be a great time to get Pierce rolling again in the first of six games remaining in the regular season. The Lions game is one where anything other than victory is unthinkable as the Vikings look for their ninth straight victory over Detroit.

With Jared Goff at quarterback and a cast of “who’s nobody” at wide receiver, the only way the Lions offense has a chance to win a game comes from running the ball. The Lions lead back is D’Andre Swift is out, so the Vikings defense needs to be able to keep these backup running backs in check.

The fragility of the Vikings run defense and the team’s capacity for playing down and keeping every game close is apparent. If the winless Lions get one in the win column this season, they might see this game as their chance.

The reverse fixture earlier in the season at US Bank Stadium was unnecessarily close.

Also Read: Who Should be the Vikings Right Guard?