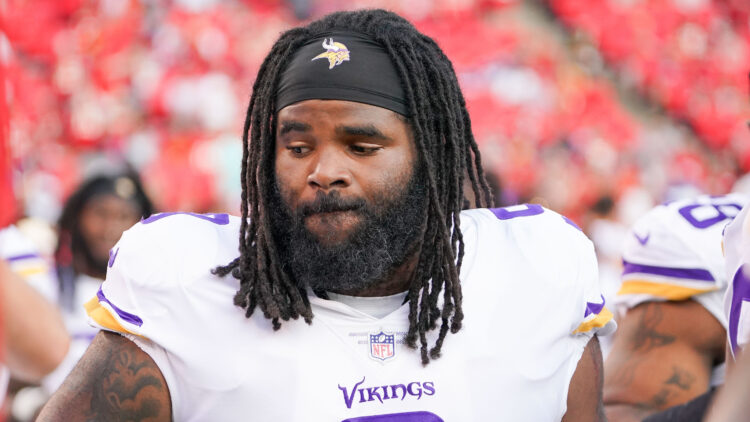 It’s no secret. When Kevin Stefanski left Minnesota to become the head coach of the Cleveland Browns, he took the Vikings style of play with him. An offense that lives and dies on the run game, which then enables quarterback Baker Mayfield to thrive, especially in play action. The Browns have unquestionably the best running back tandem in the league in Nick Chubb and Kareem Hunt, making them even more challenging to stop. So the question is, how does the Vikings defense stop them running all over them this Sunday?

News of a Michael Pierce injury on Thursday was not good timing. This isn’t the game you want to be without your big run-stuffing juggernaut. He is designated as questionable with the elbow/shoulder injury he sustained. Head coach Mike Zimmer told the media he was hopeful Pierce would be able to play, and there was no talk of tweaks.

For the first time this season, Anthony Barr hasn’t been ruled out of the game on Friday. The linebacker is still listed as questionable and didn’t log a full practice all week due to his knee injury. So the hope of his presence that would significantly improve the run defense, feels somewhat optimistic.

Heavy Rotation on the Defensive Line

Coach Zimmer likes to rotate the line, it keeps everybody fresh, and he can use different personnel for different types of plays. In the middle of the line, Dalvin Tomlinson and Michael Pierce are the starters, and see the most snaps 60% and 54% respectively. There has been plenty of Sheldon Richardson (39%) and Armon Watts (21%) though.

Finally, playing with a lead in the second half against the Seahawks saw more use of Richardson and less Pierce, as Russell Wilson tried (and failed) to chase the game. After two and a half weeks of defensive struggle, something seemed to click in the second half against the Seahawks. Keeping that offense from adding any points in an entire half of football was no mean feat.

The quality of the run defense dips when the starters are replaced. Pro Football Focus grades the run defense of the Vikings defensive tackles as follows, Micael Pierce – 70.2, Dalvin Tomlinson – 64.7, Armon Watts – 52.6, Sheldon Richardson – 43.7. Tomlinson had by far his best game this past week, after a shaky start in the first two weeks. His showing against Seattle was more akin to what you expect of your “big money” free agent signing. His 69.9 grade from PFF is the eighth highest on the team through three weeks, and that should improve. Michael Pierce’s score of 75.2 is fourth best.

The Vikings Best Players,
Thru 3 Weeks,
Per @PFF Grades:

Help from the Rest of the Defense

With the two big defensive tackles playing well, why have the Vikings given up over 100 yards rushing in all three games this season? Giving up 358 yards from 75 attempts at an average of 4.8 yards a carry. Is not what I envisioned with the beef added to the middle of that line this season. The fact is, two men on their own can’t stop teams running attack. They need help from their teammates to cover where they can’t be. That help has not been forthcoming.

Teams have had a lot of joy running wide, and then at times during the 46% of times Michael Pierce hasn’t been on the field. They have had success running the ball straight up the middle. Watching this season’s games back, all three opposing reams did a good job of keeping their running back away from the Vikings big number 58.

Something easily done when the rest of the team is failing to have any impact on the opposition’s run game. Danielle Hunter and Stephen Weatherly have respectable grades via PFF for run defense, with 63.1 and 65.1 respectively. Starting right defensive end DJ Wonnum has a very poor 45.9 grade. Emerson Griffen rounds out the edge defenders with a grade of 55.5. Support from the linebackers needs to be better. Eric Kendricks grades at an average 58.7 so far. For all the good we’ve seen from Nick Vigil, it’s not been coming in run defense where he has struggled. As his grade of 43.3 shows. This is where a healthy Anthony Barr would be so important.

Just in case you haven’t realized how good Nick Chubb and Kareem Hunt are here, are the stats. PFF rushing grade for Chubb is 81.5. For Hunt, it’s 81.2, he also has a respectable 75.6 receiving grade. Running the ball, it’s 262 yards and three touchdowns for Chubb, and 165 yards and two touchdowns for Hunt. With an average yards per carry of 5.5 and 5.7, which is the third and fourth highest in the league. That’s the arduous task awaiting the Vikings defense.

If the Browns get that run game motoring, then that sets up the play-action where quarterback Baker Mayfield thrives. Somehow stop it and put the game in the hands of the former number one overall pick. Then, the Vikings have a chance. Mayfield is improving year on year, but he’s still far from elite and has a reliance on the run game opening things up for him.

Outside of the returning Odell Beckham Jr., the Browns aren’t stacked with super talented pass catchers with Jarvis Landry currently injured. Donovan People’s-Jones and Rashard Higgins are solid players, but not ones to strike fear into the heart of the opposition. Rookie Anthony Schwartz hasn’t caught a pass since his impressive debut in week 1. The tight end trio of Austin Hooper, David Njoku, and Harrison Bryan can be effective on their day, but we aren’t talking about Travis Kelce or Darren Waller here.

Completely stopping the Browns run game might not be possible, but the Vikings have to find some way of at least slowing it down.