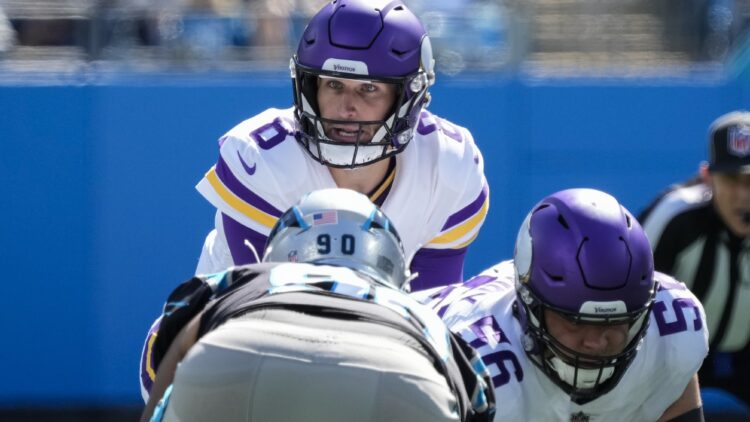 A segment – a large one, in fact – has always believed in the performance legitimacy of Minnesota Vikings quarterback Kirk Cousins. But folks not quite sold on his resume and abilities typically voice their discontentment the loudest.

Mainly, Cousins is chided for a personal win-loss record that habitually hovers around .500. For example, after heroically beating the Carolina Panthers in Week 6, Cousins’ “QB Record” returned to even-steven at 54-54-2. Cousins consistently delivers about 28-35 touchdowns per season with 4,000+ passing yards to boot, but for those not sold Cousins, the numbers are not good enough. He must throw 40+ touchdowns and 5,000+ passing yards for the skeptics to believe the hype – is the takeaway from the persistent refusal by fans who decry his body of work.

Well, thanks to a robust start to 2021 for the Vikings passer, even the Cousins detractors are changing their minds – at least in the shadows. Minnesota has embedded itself in close games every step of the way in 2021, so Cousins’ production in late-game situations – the clutch – is in plain view for the world.

And Cousins is delivering.

During each close game, late in the 4th Quarter, Cousins is putting the Vikings in a position to win. Sometimes, it’s working – the Detroit Lions and Carolina Panthers games are examples. In earlier games this year, it did not – the Dalvin Cook alleged fumble at Cincinnati and the missed game-winning field goal at Arizona by Greg Joseph.

Regardless, Cousins is doing his part – which is what fans have asked all along. Deliver when the game is on the line, damnit. Cousins has responded routinely this season, driving the Vikings into game-winning territory.

VikingsTerritory unscientifically polled Vikings fans this week about the prospect of change if the 2021 season does not end in playoff success. Before the season, the working theory suggested Cousins and head coach Mike Zimmer were a package deal, relying heavily on the results of 2021 for employment into 2022.

Now, those stakes – the ultimatum, so to speak – is a Zimmer-only affair. Vikings fans are warming up to the idea of jettisoning Zimmer – and Zimmer only – if Minnesota bumbles to an 8-9 record or so. The vast majority of fans want to see what Cousins and the existing roster can do with a new coach, if Zimmer is determined to be stale by the time Black Monday hits the calendar in 2022. Here’s the poll:

73% prefer life after Zimmer to still involve Cousins. Because Cousins has been a source of “he ain’t quite it” since his arrival to Minnesota in 2018, the fruits of this poll are astonishing.

Therefore, assuming Cousins continues this 2021 level of output (13 TDs, 2 INTs, 0 Lost Fumbles, 105.4 Passer Rating), the head coach will be accountable for wins and losses at season’s end – not Cousins. And sensible folks knew this all along. “QB Wins” are not a fair stat to assign a quarterback alone – head coaches are the men accountable for the entirety of the enterprise. In 2020, Deshaun Watson played marvelously, and no one really questioned if he was a Top 5 quarterback when his team limped to a miserable 4-12 standing. The reality is this: QB Record is only exalted to make a player look particularly good – or particularly bad.

Cousins is a very good quarterback, falling just short of the upper-echelon tier owned by Patrick Mahomes and Russell Wilson. He nestles in the category hosting Dak Prescott, Matthew Stafford, and Ryan Tannehill. To be sure, the Vikings and their fans would be foolish to consider Cousins’ career statistical accolades the one outlier in NFL history. Cousins can’t just be the one guy who throws all of these touchdown passes and accumulates all of these yards for nil.

He cannot singlehandedly drag a team to the postseason or Super Bowl. Elite passers do that. Cousins isn’t elite – but he’s not wildly misplaced from the tier either.

Finally, Vikings fans are starting to realize it.

It only took four seasons.