Sansevere: Death, Taxes, and the Vikings Screwing Up — That’s Life 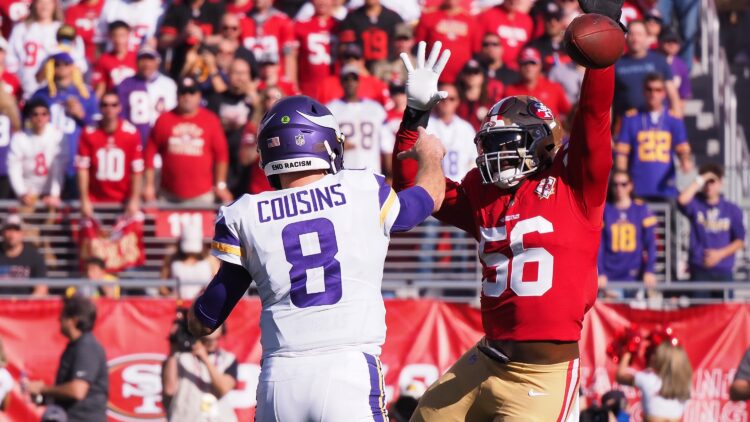 The three things you can always count on: Death, taxes, and the Vikings teasing you into thinking they turned the corner.

The Vikings did that after back-to-back wins, right?

They got to .500, got fans all excited, and then went to San Francisco and, as is their custom, crapped the bed.

That was a sorry game, as in, “Sorry, we messed up again.”

The Vikings defense was brutal against the run and not so terrific against the pass. And Kirk Cousins is the only NFL quarterback I’ve seen line up behind his right guard thinking it was his center.

It would have been one thing if it was some sort of trick play. You know, with a direct snap going to the running back. The tip-off that it wasn’t a trick play was when the running back snuck up behind Cousins to tell him to move one lineman to his left.

Cousins is confounding. He can be outstanding, as he was in wins over the Chargers and the Packers. And he can be a clown show. There was that interception into double coverage. That awful throw into the end zone turf on a two-point conversion attempt when he could have run it in. That lining up behind the guard.

Never been a Cousins fan. Never thought he could lead a team to the Super Bowl or even deep into the playoffs. He will put up good numbers and keep you hovering around .500, but he is not the type of quarterback, like Brady and Rodgers and Mahomes, who can carry a team to a multitude of wins..

His game is a microcosm of what’s wrong with the team. He fools you into thinking he’s turned the corner and is ready to play like he’s elite. But in the end, just like with his team, he cannot handle success.

And speaking of the end, it is near for Mike Zimmer.

He needed a win in San Francisco to salvage his coaching career for a few weeks because, well, you cannot convince me he will win in Green Bay, beat the Rams, and sweep the Chicago Bears. I’m not even convinced the Vikings will beat the Lions, a scrappy bunch due for a win.

And if they lose three of the final six games, they’re 8-9 and looking for a new coach.

They should be looking for a new general manager as well, but Rick Spielman can escape the season with his job.

The best thing Spielman has going for him are Justin Jefferson and a few other players he drafted — like Dalvin Cook, like Christian Darrisaw, like Cam Bynum, like Danielle Hunter — that the new coach can build around.

Spielman’s time might not be coming, but like the aforementioned death and taxes, you also can count on Zimmer being a goner.

Also Read: The GM’s Reactions after a tough loss at San Francisco