The GM’s Reactions after a tough loss at San Francisco 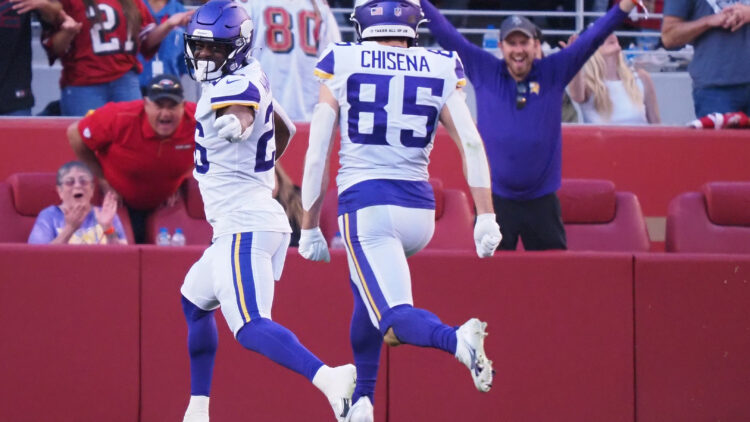 I heard a stat back in my GM days from our analytics people that stated a team returning a kick or punt for a touchdown has an 80% chance to win the game. What I didn’t ask is how that win percentage drops if you turn the ball over twice deep in your own territory, leading to 10 points for the opposition. Well, the above scenario is precisely what occurred for the Vikings in their 34-26 tough road loss to the San Francisco 49ers.

Those costly third quarter turnovers on an interception by Kirk Cousins and a fumble by Dalvin Cook helped San Francisco to a lead the Vikings couldn’t overcome despite Kene Nwangwu’s second kickoff return TD this season and a couple late game opportunities that the offense squandered.

Chalk it up as the sixth time this season that the Vikings have lost in a game they led by seven or more points. Minnesota is still in decent shape playoff-wise with a stretch of winnable games coming up starting Sunday at winless Detroit but the 5-6 Vikings need to get on a roll. They’ll likely have to do it for a couple games without Dalvin Cook (who Coach Mike Zimmer says is “day to day” with a shoulder injury) and also possibly without Patrick Peterson who is now on the Covid list (but he is vaccinated and can play on Sunday with two negative tests 24 hours apart).

Here are my other reactions to Sunday’s tough loss in San Francisco:

1.The 49ers played their preferred style in outrushing the Vikings 208-67 and holding the ball for 37 minutes vs. 23 for Minnesota. The Minnesota defense, missing several key players, did some good things with a nice early interception by Harrison Smith and in holding Deebo Samuel and George Kittle to one catch each. But they were undone by the running game with Eli Mitchell rushing for 133 yards and Samuels gaining 66 yards on the ground with 2 TDs along with Brandon Aiyuk getting loose for three big catches for 91 yards.

2. Another last two minutes of first half defensive letdown: San Francisco had a 15 play, 85 yard drive that consumed 8:20 of the second quarter and resulted in a TD pass from Jimmy Garoppolo to Jauan Jennings after Aiyuk had caught a 24 yard pass on 3rd-and-11. Mackensie Alexander was the defender on both plays and Peterson was flagged for holding on a 3rd-and-8 play on the drive. The Vikings have now allowed a league-worst 66 points in the last two minutes of the first half.

3. Minnesota needed more from their linebackers on run D and in covering short passes with the defensive line missing key players: Anthony Barr makes very few impact plays and too many tackles 10 yards downfield in coverage (and left the game with a hamstring injury). Eric Kendricks, who is usually outstanding, and Nick Vigil had trouble separating from the 49er run blockers and did not make enough tackles for short gains (although Kendricks was clearly held by George Kittle on Samuel’s 20 yard TD run in the first quarter).

4. Cousins off his game: we know the Vikings offense has to be top notch virtually every week to overcome the defensive issues caused by injuries and Covid. Cousins played well early with two first half TD passes to Adam Thielen but was out of sync at the end of the first half when he threw to nobody with five seconds left and a short completion would’ve set up a long field goal attempt (but the Vikings should’ve called timeout with 57 seconds left in the first half and the 49ers facing 3rd-and-11).

Cousins then had one his worst halves of the season. His interception was an awful throw that he telegraphed to a well covered Adam Thielen when Justin Jefferson was open on the sideline.

Cousins looked skittish as he short hopped a two point conversion attempt to a wide open Jefferson after the Vikings had closed within 31-26 on Nwangwu’s kickoff return TD. Then he missed an open K.J. Osborn when he forced a low throw to a covered Tyler Conklin on a 3rd-and-Goal fourth quarter play before he overthrew Jefferson on fourth down (after having to call time out when he was so frazzled that he tried to take a snap from surprised right guard Oli Udoh).

On the final drive, he missed a wide open Thielen on the play when Osborn should have drawn a pass interference call (and was in close quarters on the play). Finally Cousins threw high and outside to Jefferson on the ensuing fourth down play to end the game.

5. Bad call, Klint: 2nd-and-Goal from the 49ers 5-yard line with 10 minutes left and after Alexander Mattison was stuffed for one yard, offensive coordinator Klint Kubiak called another Mattison run that gained only two yards, setting up the incompletions to Conklin and Jefferson. Not the aggressive play calling of the prior two weeks.

Despite scoring three offensive TDs, it was a tough day overall for the offense especially on third and fourth downs as they converted only 3 of 11 during the loss in San Francisco.

6. Special teams up and down: another great kickoff return TD by Nwangwu (who will get more opportunities on offense as he backs up Mattison if Cook can’t play), some good kick coverage but a costly missed extra point by Greg Joseph.

7. The Vikings were badly damaged in this game by several missed officials’ calls including the late non-call when Osborn was interfered with and the hold by Kittle on Kendricks that was not called. Thielen also was adamant that he caught a fourth quarter pass that was ruled incomplete and unsuccessfully challenged by Mike Zimmer (costing the Vikings a timeout). But as Vikings Hall of Fame Coach Bud Grant used to say, “Sometimes you have to play well enough to overcome bad officiating.”

8. Ultimately, the Vikings fought hard as they always do and had a chance at the end as they always do this season but it wasn’t enough against a quality team on the road. The loss in San Francisco was due mostly to tough circumstances; a depleted and worn down defense and a QB who, after playing great in wins over the Chargers and Packers, reverted to not coming up big at crunch time.

Cousins needs to complete more than four passes to Jefferson and quickly get back to his cool, confident, aggressive and productive QB persona as he heads to Detroit and then has a quick turnaround with a Thursday night home game against the Steelers. And Zimmer must work some magic on defense and get some of his injured starters back soon.

1.The Vikings were helped in the wild card race with Week 12 losses by the Saints, Eagles and Panthers but they fell 3 ½ games behind the Packers in the NFC North.

2. The Patriots won their sixth straight game and made a statement by thrashing the AFC South leading Titans 36-13. Pats quarterback Mac Jones threw for 310 yards and 2 TDs, reinforcing his status as the best QB in the 2021 draft class despite being the fifth QB selected in the first round. It’s certainly helped Jones to be coached by the one of the best head coaches of all time in Bill Belichick and one of the NFL’s top offensive coordinators—Josh McDaniels.