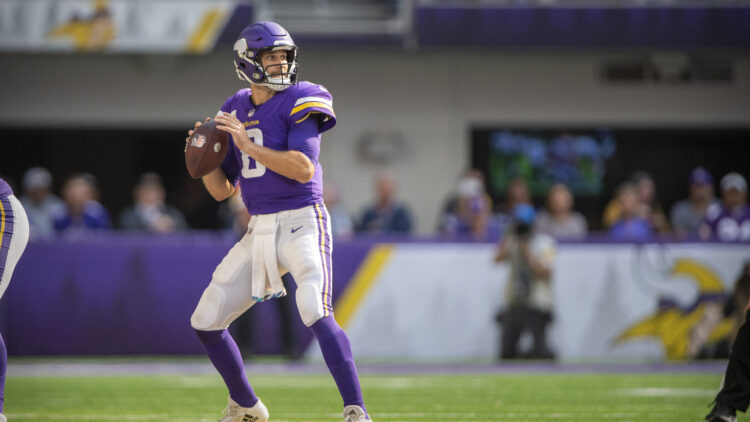 Kirk Cousins, on the Monday after Week 5 in the NFL, is the league’s fourth highest-graded quarterback per Pro Football Focus.

For the love of God, let him do his thing. Conservative offensive playcalling, like that on display in Week 5, will be the undoing of the Mike Zimmer-led Vikings.

Cousins is not flawless — and he never will be. His pocket presence disables his placement in the NFL’s elite tier of quarterbacks. His improvisation skills are nowhere near a Patrick Mahomes or Russell Wilson level. And his bad games — although few and far between — drag his team to the depths of hell.

Yet, when allotted pass protection from his offensive line, Cousins is outstanding. This is indisputable. He’s accurate, strong-armed, and clutch. Three times in 2021, Cousins has led the Vikings to game-winning moments. Only one of those occasions was accompanied by his teammates doing their job in unison. And that was on Sunday versus the lowly Detroit Lions.

Minnesota spent all afternoon clinging to a one-score lead for some godforsaken reason. Ordinarily under Zimmer, the Vikings at least inflate the score by two touchdowns before “sitting on it” with staunch defense. In Week 5, Zimmer and his offensive coaching staff decided to sit on it with a one-score lead — an impeachable offence for the modern, offensive-driven NFL. What’s more, the current Vikings defense, while improving, isn’t good enough to be a sweltering beholder of a tiny lead.

Evidenced by the conservativism against the Lions and Cousins’ expensive contract, he must be handed the keys to the Vikings offense for the remainder of this season and perhaps beyond. Cousins is erroneously labeled as a game manager at times, but the man can drag an offense to prosperity. He did it for the Washington Football Team. Once you accept Cousins is around the 11th-best passer in the league — and never consistently higher — it’s straightforward to comprehend his role. The man is paid like an elite quarterback per average annual salary. But he isn’t quite a part of that group. Instead, he’s a damn good signal-caller who should be perceived in the “very good” grouping of NFL quarterbacks.

The Vikings will go nowhere rushing the football in hopes of protecting a one-score lead. Teams not named Lions will eviscerate that strategy. Like, all of them. Cousins can fling it. He enjoys flinging it. All quarterbacks enjoy flinging it sans always-underneath ones like Chad Pennington 20 years ago. Surprise, surprise — Minnesota has weapons to get underneath passes from a quarterback who can launch it. Their names are Justin Jefferson, Adam Thielen, and K.J. Osborn.

Here’s the problem through five weeks:

Cousins can effectuate this while still affording Dalvin Cook or Alexander Mattison touches. It’s called balance — and appropriate playcalling according to the game’s situation.

Before the start of 2021, Cousins built a career connecting on long touchdown passes, despite what false narrative might declare:

The fix is simple. A simple look-back at the Week 2 game against the Arizona Cardinals is also a roadmap. Let Cousins do his thing. He can still hand the ball to the tailback, but it need not be the strategy on 3rd-and-Longs or during bizarre attempts to hang onto a teensy lead.

Cousins earns a lot of money. Let him deserve it. Hand him the keys, enabling the man to extend his employment with the Vikings beyond 2021 — or go down throwing, as every handsomely-paid quarterback should do.