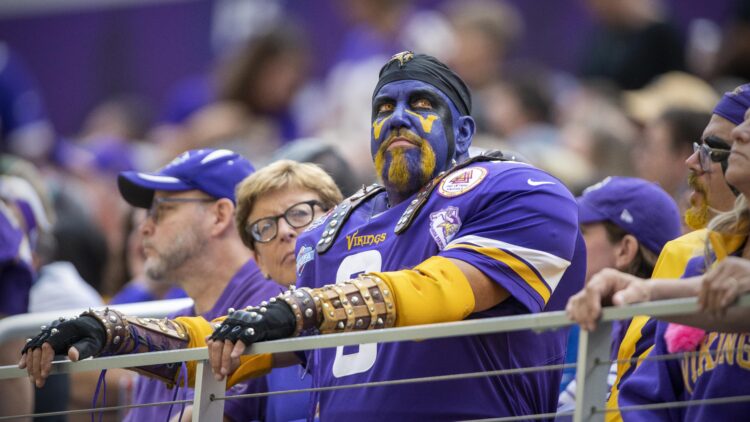 Oct 10, 2021; Minneapolis, Minnesota, USA; A general view of a Minnesota Vikings fan during the game between the Minnesota Vikings and the Detroit Lions at U.S. Bank Stadium. Mandatory Credit: Jerome Miron-USA TODAY Sports

A win is a win. I’m a firm believer in that statement for professional sport. However, as Greg Joseph’s 54-yard field goal sailed through the posts, I didn’t feel much like a winner. I don’t believe myself to be “one of those negative guys” and feel like I generally try and look for the positives. I do, though, try to remain balanced, and if I think something is bad, I will call it out. The collective performance of the Minnesota Vikings in Week 5 wasn’t good enough.

The most frustrating thing is I truly believe this team can be good. Good enough to win a Super Bowl? That seems a stretch right now, but there is plenty of talent on the roster. As we saw with the Cardinals game, we can go toe to toe with one of the current favorites to hoist the Lombardi Trophy in February. So what is going wrong?

My biggest gripe is that we seem to play large chunks of games without the aggression and intensity that’s needed. That’s how it looks. The offense is the prime example. Calling a run play on 3rd and 7 when a 1st down wins the game, after calling two run plays that only went for three yards. If you wanted something, to sum up, the current state of this team, that was it. And it was compounded by Alex Mattison fumbling the ball, giving it to the Lions on the Vikings 20-yard line. Three plays later, D’Andre Swift ran in for a touchdown.

A successful 2-point conversion gave the Lions the lead. Kirk Cousins came to the field with 37 seconds to save the Vikings season. Save it, he did. With no more time for running the ball, the game was in Cousins’ hands, and he delivered, throwing three passes for 46 yards to give Greg Joseph the chance to make amends for his missed kick against the Cardinals. There was no mistake this time, and somehow the Vikings won.

Unlike the Cardinals game, where a walk-off field goal would have resulted in fist-pumping and cheering. I felt a bit deflated, and I wasn’t the only one. Despite the win, this game did more to highlight what was going wrong than perhaps any other game.

Put the Game in the Hands of Kirk Cousins

Except for the Browns game, Kirk Cousins has been excellent this season. Outside of the more comfortable win against the Seahawks, Kirk Cousins has engineered potential game-winning drives in three games, right at the death in those clutch moments. The Vikings only took their chance for the win for the first time this weekend.

When the Vikings offense goes uptempo and is aggressive, it looks good and moves the ball down the field. When it starts looking to establish the run, chew up the clock, play it safe, or whatever they are trying to do. It stalls. Every time. Vikings reporter for ESPN Courtney Cronin put up this tweet last night.

Add in the passes to Adam Thielen on the last drive, and, understandably, Vikings fans are getting frustrated that they don’t see more of that type of play.

Will We See a Philosophical Change?

Postgame, when asked why the team can’t score in the second half, coach Zimmer replied, “I’m trying to figure that out. We couldn’t get it going until we got into the two-minute drill at the end. Maybe we need some more of that.” That is exactly what we need, but will we see it?

There is often talk of who is to blame for the play calling on offense. The offensive coordinator calls the plays, right? Some believe the defensive head coach has little to do with offensive play calling. Others believe he has everything to do with how the offense is set up. How much Zimmer is banging the drum for the team to run the ball on a play-by-play basis, we don’t know. In another postgame comment, what he said about the decision to run on that 3rd down play was telling. “We talked about it, but I thought the way we had been rushing the QB, we had a pretty good chance to stop them.”

Rather than trusting his offense to win the game with one play, he would instead put his defense back on the field to hold out for two minutes. In the modern NFL, that is the wrong way to think. After all, Kirk Cousins only needed 37 seconds to get in field goal range. Mike Zimmer was afforded a stay of execution thanks to the arm of Kirk Cousins and the leg of Greg Joseph. If not for their end-of-game heroics, the calls for coach Zimmer to be fired would be deafening.

Evidence of Change Needs to Be Evident Next Week

There needs to be a change as the Vikings head to Carolina for Week 6. After a 3-0 start, the Panthers have lost two on the bounce and look far more beatable. The hot seat under Mike Zimmer only cooled thanks slightly to snatching victory at the last moment. He needs to back it up with a win and a performance in Carolina — that restores faith in his team from fans.

Be aggressive, including the defense, a unit making big plays and keeping points off the board. However, the bend but don’t break philosophy feels like it’s giving teams more chance than they should have. The Detroit game being a prime example. The Lions should never have been in that game after Alex Mattison was bundled in for his touchdown. They were in it until the very end because the Vikings failed to finish them off.

The Minnesota Vikings need to play to win rather than play not to lose.