One of the Fastest Players in the NFL: Coming to a Vikings Team near You 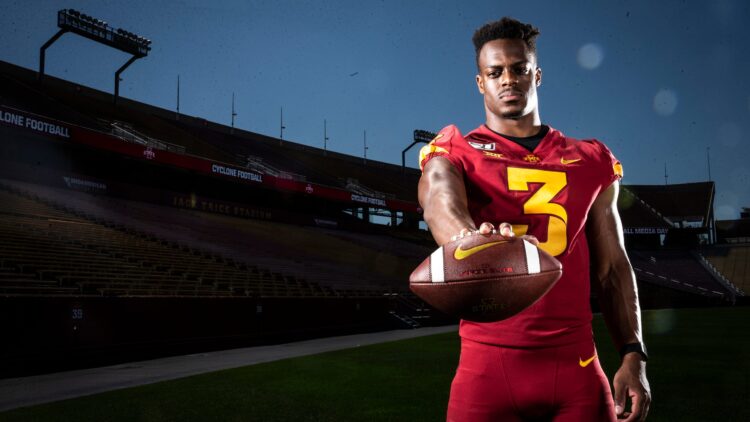 The Minnesota Vikings shook up their running back room on Wednesday, releasing veteran halfback Ameer Abdullah, formerly a 2nd Round Pick from by the Detroit Lions in the 2015 NFL Draft.

He was an obvious candidate to return to the Vikings practice squad – Minnesota releases players frequently, only to add them right back – but the finality of the transaction was apparent when the Carolina Panthers scooped the services of Abdullah.

And that means Abdullah is gone-gone. All told, the now-Panther spent the equivalent of three full seasons with the Vikings, mostly in an RB3 capacity. Now, he’ll get some tread with Carolina while tailback Christian McCaffrey continues to rehab from injury.

The Vikings weren’t disillusioned with Abdullah – they just needed to clear a roster spot for someone else. And that man is Kene Nwangwu, a speed demon rookie from Iowa State.

Nwangwu missed the first six games of 2021 due to a hyperextended left knee. Minnesota placed him on Injured Reserve, but now it’s time to have a look at the young rusher.

Minnesota does not need oodles of production from another running back. Behind perhaps the Cleveland Browns with Nick Chubb and Kareem Hunt, the Vikings employ the best one-two punch in the NFL at running back with Dalvin Cook and Alexander Mattison. Yet, Nwangwu adds an additional dynamic – speed, speed, and more speed.

Assuming the Vikings actually utilize Nwangwu in a playmaking manner, head coach Mike Zimmer now holsters a weapon faster than D.K. Metcalf, Ja’Marr Chase, and Mecole Hardman. Nwangwu is basically as fast as 2020 rookie Henry Ruggs III, who was fawned over in the spring of 2020 for speed.

The interesting aspect will be the way Minnesota uses the 23-year-old. Notoriously, the Vikings slow-roll rookies into on-the-field snaps, evidenced last year by Justin Jefferson needing three games to hit stride or Wyatt Davis this year, a rookie with high upside who doesn’t really play at all.

But if Minnesota wants to get kinky on offense – they should; some stretches are lifeless through six weeks – Nwangwu is the specimen to tap for bedazzlement. Speed kills. Nwangwu is a speed merchant. Unless he fumbles like a madman or isn’t prepared, in general, for the bright lights of the NFL, there is no reason to let Nwangwu sit idly on the bench.

The departed Abdullah was used in special teams for kick returns in the first six games of this season. Nwangwu might get his early action showcasing the speed on special teams – a potentially welcomed site because the Vikings have experienced no homerun hitters on special teams since Cordarrelle Patterson left the team in 2017.

Nwangwu’s speed was clocked at 4.29 seconds for a 40-yard dash during his Pro Day in March. If Madden ratings are important to you, he’s one of the fastest players in that realm, surprising some gamers with a “who the hell is the guy?” reaction. Anthony Schwartz, a rookie wide receiver for the Browns, was considered the fastest player in the 2021 NFL Draft, notching a 4.26 40-yard dash. Nwangwu is .03 seconds off his pace. He’s a fast dude.

The optimistic take on the arrival of Nwangwu is the exodus of Abdullah. Frequently, Minnesota hangs onto guys it likes such as Marcus Sherels in year’s past — or Dakota Dozier in the present. The trimming of Abdullah from the roster implies the coaching staff truly does want to implement some Nwangwu looks into special teams and perhaps on offense. A final reminder: Nwangwu isn’t a teensy 5’7” athlete with a 160-pound frame – he’s 6’1” and 210 pounds. There’s a little bit of beef, too. That’s DeAndre Hopkins’ stature.

Bring on the speed.