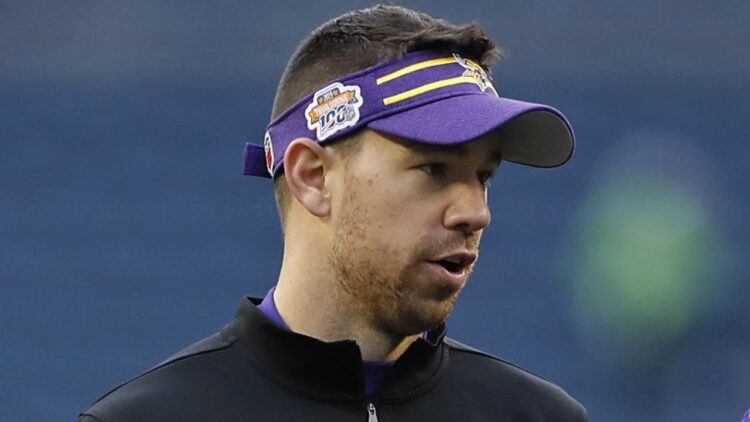 This season has seen Klint Kubiak, Kirk Cousins, and the Vikings offense come under repeated fire.

The Minnesota Vikings finished last season with one of the most explosive offenses in the National Football League. They had playmakers on the roster to make most of the NFL jealous — Dalvin Cook, Justin Jefferson, Adam Thielen, and Irv Smith.

Gary Kubiak retired, and his son Klint took over as offensive coordinator. With Kubiak junior taking the reigns of the offense, the theory was a smooth transition, and the offense would carry on from where they finished last season.

Unfortunately, that has not been the case. Explosive plays have been too infrequent, and the offense has become bogged down too often, looking limp and conservative rather than aggressive and explosive.

Mike Zimmer, Klint Kubiak, and Kirk Cousins are the primary focus for fan frustration, with how the season has panned out this far. Son Kubiak certainly knows how to script a successful opening drive. The second half has been more problematic as the Vikings have rarely threatened the endzone after the first half — scoring 15 first-half touchdowns, compared to six touchdowns in the second half – plus one in overtime.

To be that effective in the first half and so incompetent in the second half is puzzling. But the recent Chargers game improved the record slightly.

Criticism was coming Kubiak’s way, questioning his ability to adjust in-game and solve problems the opposition put in front of him. Kubiak finally found some answers against the Los Angeles Chargers.

After falling behind 17-13 following the Chargers opening drive of the second half and going three and out in response, I have to admit to thinking, here we go again. For the first time, Kubiak rallied his offense to 11 and 13 play touchdown drives — and then one final 13 play drive, which included three QB kneels.

So for the first time since Week 3, the Vikings faithful were able to relax as time expired. Kubiak has rightly faced criticism, so it is only right to acknowledge when he does some things right.

If you are beating the opposition with something, they will make changes, particularly after halftime, to counteract what you have been doing. That’s how the NFL works. You have to be able to react and find another way to beat the opposition. Kubiak had shown no ability to react and change a game back in the Vikings favor – until last drive desperation.

If you are ahead in games like the Vikings have found themselves in every game this season, you need to stay aggressive and play to win. Another criticism thrown this team’s way is that they play scared and “not to lose” rather than win. That type of football is never going to keep fans happy.

It was not a perfectly called game on Sunday — far from it — but the aggression fans called for was more evident. Kubiak also found a way to keep his key playmakers consistently involved. He still has a way to go to prove he is up to the job. After all, Kubiak is a first-year coordinator who’s made mistakes and had his struggles.

If he can learn quickly, he may still have a future. It needs to be real quick, though.

Despite general offensive struggles, Kirk Cousins authored a very good start to the season, playing well in big moments and protecting the ball. Pro Football Focus gives Cousins an overall grade of 90.8, ranking second among quarterbacks in the league.

As I predicted in another article, one bad game, and the pitchforks were back out. It wasn’t a good night for Cousins in Baltimore, and there was plenty of valid criticism to go around. He left some plays on the field, and he has his part in why the Vikings have struggled to make explosive plays.

In Los Angeles, Cousins went head to head with one of the best young quarterbacks in football with Justin Herbert. Cousins came out on top, not just in the win column, but he outplayed the Chargers signal-caller, totaling an impressive stat line of 25 of 37 for 294 yards and two touchdowns. Plus, it was a victory against a winning team — the thing both Mike Zimmer and Kirk Cousins aren’t good at.

It needed to change on Sunday, and it did — with Cousins having an excellent second half, complete with a game-winning drive, the other things people claim he can’t do.

The final part of the offensive equation is the offensive line and has long been the Achilles heel of this team. When you employ a pocket passer like Kirk Cousins, it’s important to give him the best protection possible. The Vikings haven’t done that. The line is in better shape now than when we had Dakota Dozier and Dru Samia as starting guards, but it is still a long way from being considered a good unit.

Brian O Neill is a good right tackle and is now being paid accordingly. On the other side, Christian Darrisaw shows promise as the franchise left tackle we hope we drafted with this year’s first-round pick. The interior is still shaky, to say the least. Ezra Cleveland has proved himself serviceable, while Oli Udoh has some good days and some very bad days. My biggest concern with Udoh is the amount of holding penalties.

Meanwhile at center, we’ve had two weeks of Mason Cole. Does he stay in? Or will Garrett Bradbury return? Bradbury simply hasn’t been good enough in pass protection, but does that mean Cole is the answer? He had two steady performances, but it’s too early to say.

Some of the quick and short conservative plays, I believe, can be attributed to Kubiak trying to cover up the shortcomings of the offensive line. Cousins dropping back and letting routes develop for long routes down the field is fraught with danger. It’s a problem Kubiak must solve with regularity.

In Los Angeles, Klint Kubiak found a blueprint to build on. The offense doesn’t just need to keep playing like they did on Sunday, but build on it and get even better. A home game against Green Bay is next up, and as much as the hype around the Packers evolves around Aaron Rodgers. Their formidable defense has as much to do with their success.

The division showdown will require a Vikings offense in top form to beat the Packers. Klint Kubiak, Kirk Cousins, and the Vikings offense need to deliver again. There’s nothing like a convincing win against the Packers to make everyone happy, but does this team have it in them? We’ll find out.

Also, Read: Why Diggs’ Exit Is Unlike Anything to Do with Justin Jefferson. For Now