Why Diggs’ Exit Is Unlike Anything to Do with Justin Jefferson. For Now. 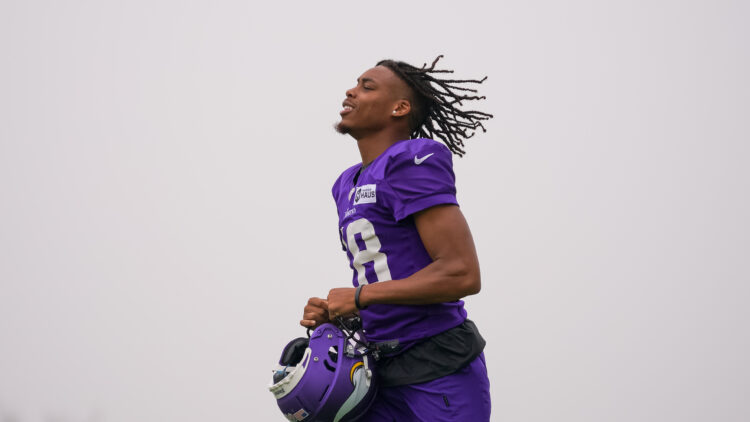 While it feels like centuries ago, Diggs departed the Minnesota Vikings less than two years ago.

Perhaps it’s more accurate to say that he forced his way out. We all remember the 2019 season teetering at 2-2. A record that now seems pretty good, unfortunately. Back then, the offense was going through growing pains as Kevin Stefanski started to learn the ropes of the offensive coordinator role.

In all too familiar fashion, the Vikings offense sputtered against Mitchel Trubisky’s backup. Thielen called out the team and the coaching staff. However, he never demanded out and never caused unnecessary drama. Diggs, on the other hand, checked out. In his eyes, there was no future left with the team who rewarded him a massive contract and a place in NFL history with the Minneapolis Miracle. Soon there was “truth to all rumors.”

While passing was significantly down from the horrid De Filippo era, yards per attempt were up, and offensive efficiency flourished. Despite fewer passes, Diggs had the most yards of his career up to that point.

Then, the Vikings went on a win streak despite an injured Adam Thielen. Diggs was truly WR1 and flourished.

As the trade deadline passed, so did rumors surrounding Digg’s unhappiness. Then came the breaking point in my eyes — the divisional playoff win over the Saints.

Diggs only had a few catches in the game as it truly was the Dalvin Cook show. Then the FOX TV cameras caught Digg’s sideline meltdown, throwing his helmet after not having a single target in the first quarter and a half. Frustration due to lack of success can be a good thing if channeled and handled correctly. But during a wild card game that no one expects you to win and while leading is not the time to make it about yourself. In true Diggs fashion, he made it about himself to the detriment of his team at the worst possible time. It seems as if Diggs would have been happier losing as long as he was getting the ball.

A few short months and tweets later, the Minneapolis Miracle maker was gone.

Fast forward in time, the Vikings have replaced the former number-one wide receiver with a superstar — Justin Jefferson — who has the potential to eclipse the man he was brought in to replace. All for less money and a hunger to be amongst the best in the league.

Here is where the trust issues begin to kick in. As the Minnesota offense suffers week after week of horrible play-calling and time management, we are now looking for the same traits from Jefferson, as we all pray that he doesn’t go the same route as Diggs.

There is one main difference here. Jefferson has the right to be frustrated. After the first drive, where he typically sees the ball twice or more, his targets plummet and so goes the overall offense.

It is understandable when a player wants out of a bad offense and team — especially when he is a budding superstar. He has every right to maximize the opportunity to get paid and hopefully get to Canton.

I am sure some of you are seeing hypocrisy on my part. How is it acceptable for one player to leave to maximize his production while for the other, it is fine and to be expected?

Well, it’s simple. It comes down to two main factors — contracts and a personality as a team-first player.

After the Minneapolis Miracle, Diggs was rewarded with a 5-year, $72 million contract. He knew the head coach’s love for defense, he knew the history of turnover in the OC position, and he knew the team’s potential. He was 1.5 years into his deal when he deemed that being a Viking was no longer acceptable. And then he forced his way out of town.

Jefferson is on a rookie deal. He had no choice in where he wanted to go to. While he has seen great success here, I’m sure he would like to go to a more competent offensive team. That team very well could be the Vikings as they have all the right pieces. All that is needed is an offensive-minded HC that will not restrict the group to a conservative offense straight out of 1992.

Now, the most critical difference between the two stars — one actually had a great team and wanted to leave while the other is forced to tag along to the pits of a sub .500 season for the second year in a row.

There is still hope. Jefferson has shown no signs of discontent with the team or any possibility of him wanting out. That does not mean that such good news will continue. There needs to be an offensive overhaul that optimizes Jefferson’s abilities to the fullest extent. That means changes in coaching at the highest levels. If this is not accomplished, Minnesota will lose out on one of the best WRs in the league. Again.