How Justin Jefferson Can Climb to a Top 5 WR 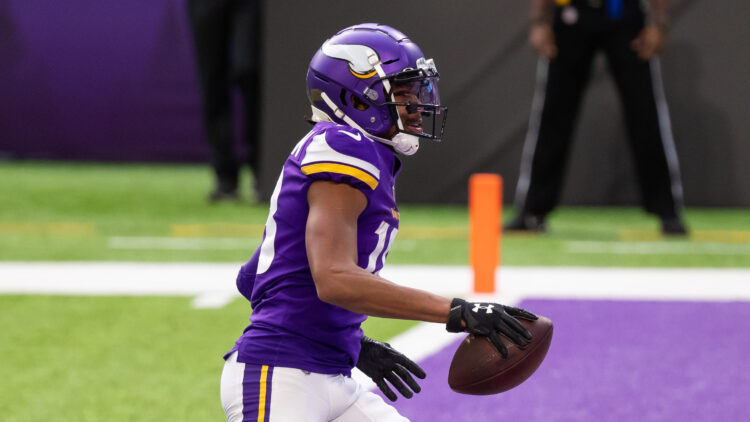 It was a dream rookie season for Justin Jefferson. Despite not initially being named the starter opposite Adam Thielen. It wasn’t long before Jefferson was making his mark on the National Football League. His breakout came in week 3 vs. the Tennessee Titans hauling in 7 catches for 175 yards and a touchdown. The LSU alumnus never looked back as he broke Anquan Boldin’s (1377 yards) rookie receiving yards record. Amassing an impressive 1400 yards, which was also the 4th most in the entire league. He’s already being mentioned in the same breath as the top guys at the position. That’s not enough for Jefferson, who is on record as saying he wants to be the best Wide Reciever in football.

So what does he have to do to claim that accolade? He needs a similar season in terms of yardage and an increase from the 7 touchdowns from last year. A single great season isn’t enough to justifiably claim Jefferson to be one of the top 5. Back-to-back seasons and we can then start a serious conversation. Any top 5 list is subjective. People view things differently. The 5 Best Wide Receivers in football are Davante Adams, Stefon Diggs, Deandre Hopkins, Tyreek Hill, and AJ Brown. So these are the men I will compare Jefferson to.

All played 16 games except Stefon Diggs (13)

One player who didn’t have any trouble repeating their impressive rookie season was Vikings legend Randy Moss. Also, breaking the rookie receiving yards record back in 1998. Moss started his career with 6 straight seasons of 1200+ yards, 5 of which including double-digit touchdowns. Matching Randy Moss is a Herculean task, but a confident individual like Justin Jefferson won’t shy away from. If he can get anywhere close to that level of production, he will be a superstar.

As those stats show, Jefferson was right at home with the top Wide Receivers. 3rd in receiving yards, 5th in touchdowns, 1st in yards per reception, and 3rd longest catch among those 5. His PFF receiving grade of 90.5 was second only to Davante Adams. In 2020 Justin Jefferson didn’t just have a great rookie season. He had a great season by any standard. He set the bar high, which brings the pressure of delivering the same, or better. If he can do that, then he should be in everybody’s thoughts when it comes to the best receivers in the league.

Heading into the Season

With the opening game against Cincinnati looming,  preparation has been far from ideal. After no pre-season last year, this was supposed to be the first time Jefferson would come into a season fully prepared. With a full training camp and pre-season behind him. Alas, it wasn’t to be. A sprained AC joint in his shoulder, which occurred during training camp back on August 6th, made sure of that. Jefferson was wrapped up for the rest of pre-season and didn’t feature in any of the pre-season games. He is not on the injury report heading into the Bengals game, so he should be fully ready to go week 1.

The Viking’s offense needs him to be a star. Running Back Dalvin Cook will carry a heavy load for the team, but the passing game needs Jefferson to be its star. The loss of tight end Irv Smith to a season-ending injury just before the start of the season was a huge blow. Leaving just Adam Thielen and a whole bunch of question marks to back him up. Theilen turned 31 this month. He’s the senior figure on the youngest offense in the NFL.

The other 3 rostered Wide Receivers are KJ Osborn and Ihmir Smith-Marsette, neither of which has caught a pass in the NFL. Plus Dede Westbrook, a new signing who is coming back from an ACL tear. Supported by Tyler Conklin and Chris Herndon at Tight End. Conklin has shown glimpses of his pass-catching ability, but it’s a big step up to be the lead guy.

Chris Herndon was acquired by trade from the New York Jets following Irv Smith’s injury. Herndon had an impressive rookie season in 2018 but followed that with only 1 catch in 2019 as he missed practically the whole season with an injury. Returning in 2020, he struggled to make much impact in a Jets team that was struggling with everything. He had 3 good games to finish the season, including 2 touchdowns. The hope will be he can build off of that now he is Minnesota and return to the player we saw in 2018. The inexperienced pair of Brandon Dillon and Ben Ellefson round out the Tight End unit. Each has one NFL catch to their name so far in their career.

Even though the Vikings offense will lean heavily on the running game and Dalvin Cook, Justin Jefferson will have no shortage of targets this season. He should get more than the 125 targets he got last season. He will start from week 1 as the top target, and there’s an extra game this season if he can keep up his production of a 70.4% catch rate and 15.9 yards per reception. It will be another huge season, leaving Jefferson’s name rightly in the conversation of the very best Wide Receivers in football.