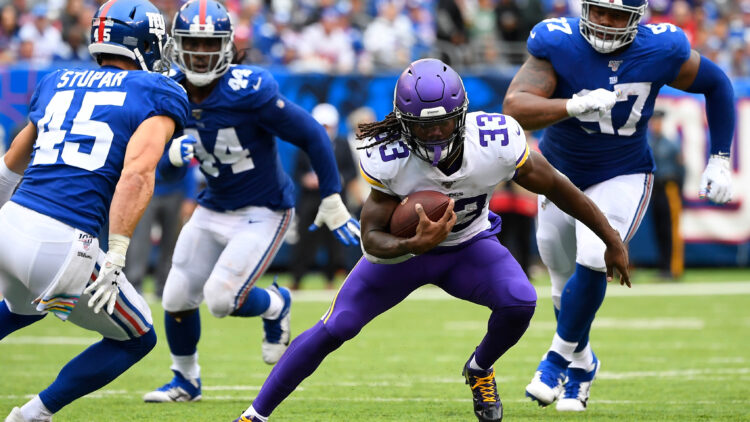 We all know the Minnesota Vikings are a “run-first” team. Last season rushing plays were called on 45.75% of offensive plays, which was actually down on 48.30 in 2019, but still the 6th most in the league. Obviously, to play that way requires a top-class Running Back, and the Vikings have one in Dalvin Cook.

I don’t get too hung up on what happens in pre-season games, but the Vikings offense without Dalvin Cook looking pretty toothless was not fun to watch. A.J. Rose’s promising 100 yard game against Denver, and 6 carries for 41 yards at an average of 6.8, and the only 2 offensive Touchdowns of the pre-season against Kansas City was the bright spark in the gloom of Vikings pre-season. Not enough for Rose to make the 53 man roster, but he has a place on the practice squad, where he will hopefully develop further.

We also never saw Justin Jefferson and very little of Adam Thielen and Alexander Mattison too. There is little doubt though that Dalvin Cook is the centerpiece that makes everything else tick. Not just what he does with the football in his hands, but the way it sets up the deep plays down the field, that make this offense dangerous.

Alexander Mattison has looked good in a supporting role, bringing him on against tired defenders to run up the middle. If Dalvin Cook hasn’t made the headway first though, Mattison often struggles. Unfortunately for him, Cook’s injuries in 2019 coincided with his own. Last season when Dalvin Cook left the field injured in week 5 against Seattle, Mattison managed to put up a 100-yard game.

The abiding memory of that game is 4th and 1 to seal the game, and Mattison failed to deliver. Russell Wilson promptly took the Seahawks down the field for the win. Just 26 yards from 10 carries the following week as the starter, in arguably the most disappointing loss of the season, against the Atlanta Falcons. A good showing in week 17 against the Lions was a reminder of Mattison’s potential.

Recently, Pro Football Focus tweeted a graphic showing their Top 5 Running Back units. A solid list which I take little issue with. They put the Vikings duo of Dalvin Cook and Alexander Mattison at number 4. Cook clearly being the main factor, but the number 2 is important. Derrick Henry doesn’t make the list due to not having a notable backup.

The Browns look like they have the standout duo on paper, but let’s look at what the numbers say for last season. Here are the combined rushing and receiving yards and the combined touchdowns for the 2020 season.

The top 4 all have similar numbers. The receiving stats of Alvin Kamara is what pushes the Saints duo to the top of the stats. This is an area the Vikings can improve, by involving Dalvin Cook more in the passing game. Especially with the disappointing news that Irv Smith is likely out for the season. Kamara’s impressive 756 receiving yards with 5 touchdowns, came off of 83 receptions on 107 targets, averaging 9.1 yards a catch. Cook averaged 8.2 yards a catch but had almost exactly only half the targets Kamara had. 54 targets making 44 catches for just 361 yards and 1 touchdown.

Doubling those targets might be too much workload for an every-down back. Kamara wasn’t asked to run the ball anywhere near as much last season, but I would like those targets to increase.

The Rest of the Cast

There have been signs of an improved interior offensive line, with Ezra Cleveland switching to Right Guard in his second year. Plus moving Oli Udoh to Guard shows some promise, with rookie Wyatt Davis also showing potential. Brian O Neill has been a sure hand at Right Tackle for the past 3 seasons, unfortunately, injury trouble for first-round pick Christian Darrisaw has meant we’ve not been able to see if he is the answer at Left Tackle. The prospect of starting the season with Rashad Hill doesn’t inspire confidence, but with Darrisaw not being placed on Injured Reserve, hopefully, his return to the fold is immanent.

Dalvin Cook will still be one of the best Running Backs in the league this season. What of the supporting cast? Cook proved he can carry a heavy workload last season, but support from others is important. A knee injury in the first preseason game against Denver scuppered Nwangwu’s chance to show what he can do. Ito Smith averaged just 2.7 yards a carry in his sole Vikings outing and was promptly cut.

I was surprised only 3 Running Backs made the initial 53 man roster, alongside Fullback CJ Ham. Kene Nwangwu was moved to Injured Reserve, leaving just Dalvin Cook and Alexander Mattison. Ameer Abdullah and AJ Rose we’re signed to the practice squad, and I would expect Abdullah goes up to the main roster initially. If injury’s we’re to happen. I find it difficult to imagine Abdullah filling an every-down role.

The same goes for Nwangwu when he returns. Returning and the occasional inventive way to get the ball in his hands sounds more likely. Is AJ Rose next in line or could another back be brought in? James Robinson proved an undrafted rookie can hit the ground running in his first season, but it’s an unlikely scenario. Perhaps Cook and Mattison is thought to be enough, and we live in hope neither gets injured. Like a lot of this season’s roster. The Running Back position looks strong initially, but then has lots of question marks.